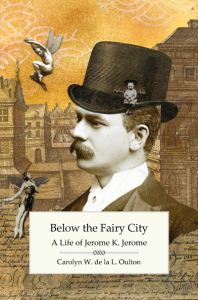 On 9 June 1870 the London evening papers announced that the great novelist Charles Dickens had died. In a barely respectable house in East Poplar an eleven-year-old boy ‘slipped quietly from the room. I do not think that anyone noticed my going. Reaching my attic, I closed the door and softly turned the key. I hoped they would forget me. Then pushing aside the low chest of drawers, I opened the window, and putting my elbows on the sill, stared out across the maze of chimney-pots to where the light still lingered beyond the dark mass of the city; and after a while tears came to my relief.’ The child’s improbable name was Jerome Jerome (his father Jerome Clapp, had reinvented himself as Jerome Clapp Jerome some years before the birth of his son) and he wanted to be a writer. More to the point, he was convinced that he himself had met Dickens less than a year before.

With hindsight Jerome was bewildered by his own reaction, ‘Even if all this had been so, a chance encounter of a few minutes’ duration does not so bind you to a stranger that, neglectful of home lessons and indifferent to your supper, you see the whole world blurred through tears because of his going.’ Nonetheless it was with the death of Dickens that a lifelong preoccupation with the man and his work, specifically David Copperfield, would begin. According to Jerome’s memoir, the meeting is fairly truthfully recorded in his 1902 novel Paul Kelver. In the novel Paul visits Victoria Park one summer evening and finds himself drawn to a man sitting on a bench. ‘He was a handsome, distinguished-looking man, with wonderfully bright, clear eyes, and iron-grey hair and beard. I might have thought him a sea-captain, of whom many were always to be met with in that neighbourhood, but for his hands, which were crossed upon his stick, and which were white and delicate as a woman’s.’ The normally shy Paul is surprised to find himself drawn out by this strange man, specifically ‘the magic of his bright eyes’, and confides to him that he wants to be a writer. They discuss their shared enjoyment of Dumas, Walter Scott and Victor Hugo, before the man asks casually what the young Paul thinks of Dickens. It is at this point that Paul unfortunately comments on his appreciation of Dickens’s humour, especially in The Pickwick Papers. Rather wonderfully he enthuses, ‘I like so much where Mr. Pickwick –’, only to be interrupted with, ‘Oh, damn Mr. Pickwick!’ Just as it seems he can do no worse, he goes on to admit that his mother finds parts of Dickens a trifle ‘vulgar’, but this he supposes is because she has no sense of humour. As Paul realises that he must go home, the strange man reminds him that he has never asked him who he is. More fascinated even than his alter ego Paul, the real Jerome evidently took to haunting the park in hopes of seeing the strange man again, but only realised who it was a few months later when he came across a portrait of Dickens in a gallery and felt convinced that the eyes were sparkling at him in token of recognition.

If they could have met again twenty years later they would have had even more to discuss. Like Dickens, Jerome was fascinated by the manners and mores of the lower-middle class and, like him, he would struggle to shake off the persistent association of his name with an early humorous novel. Notably, both were drawn to the darker side of London life; while the glamorous West End did little for Jerome’s imagination, he wrote with feeling of the overworked clerks and lonely women in the poorer districts in the East, for whom life was a constant struggle. After all, he had come so close himself to being ‘chained here, deep down below the fairy city that was already but a dream’.

Find out more about Below the Fairy City: A Life of Jerome K. Jerome