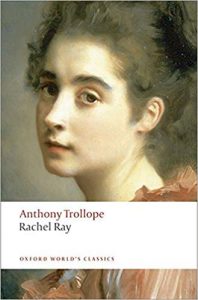 According to P D Edward’s introduction, Trollope sent a copy of Rachel Ray to George Eliot, wondering what she would think of his “little story”.  History does not tell us her response, but I suspect she would have enjoyed it, as it is not unlike her own Scenes of Clerical Life.  He tried to confine himself to the “commonest details of commonplace life” but this anything but a dull novel.

It is set in the pastoral idyll of Baslehurst, a fictional village 40 miles outside Exeter.  The local brewery, Tappitt and Bungall, is known for its “vile beer” and the late Bungall’s nephew, Luke Rowan, decides to take an active role in the business.  His return is much to the horror of Mr Tappitt, who had expected him to be a silent partner, and Mrs Tappitt is none too pleased when he fails to sweep their eldest daughter off her feet.  He instead falls for the charms of rustic ingenue Rachel Ray and sets out to woo her.  Rachel’s widowed sister, Mrs Prime, is horrified by this development and seeks to thwart their young love.

The blossoming of their relationship is contrasted with Mrs Prime’s very practical decision to allow the local curate, Mr Prong, to court her.  As their marriage looms, Mrs Prime worries (quite rightly) that her husband would assume all her wealth.  Written in 1863, this novel appeared long before the Married Women’s Property Acts of 1870 and 1882 and wives were not allowed to maintain independent finances, unless they possessed the means and nouse to organise a trust fund.  Mrs Prime decides that seeking legal advice on the matter will simply erode even more of her modest income.  She also fears that married life won’t be entirely congenial when Mr Prong refuses to listen to her views on the relative merits of the candidates in the forthcoming general election.  Of course, one of the many specious arguments to justify the endless dithering over female suffrage was that women already exerted informal influence through their husbands.  Mr Tappitt decides to vote for the candidate who supports his feud against Luke Rowan and refuses to listen to the reasonable voice of his wife.

Trollope cleverly examines both domestic and local politics through his intimate portraits of the people of Baslehurst.  Their reaction to Jewish candidate, Mr Hart,  is a fascinating examination of contemporary prejudices.  Many voters decide to vote Tory on the basis that electing a Jew would be contrary to the teachings of the Church and also, like Mr Tappit, they clearly fear change.
As with many of Trollope’s novels, the Church is a central theme, and this time he turns his attentions to low-church Evangelicalism.  I think it’s safe to say he didn’t approve of it.  The Evangelicals are all depicted as bitter and rebarbative, and their names are indicative of their personalities – Mrs Prime, Mr Prong, Miss Pucker.  The Dorcas meetings attended by Mrs Prime are filled with vulgar and humourless women, and Rachel refuses to accompany her.  Mr Comfort, rector to a neighbouring parish, is shown to be a hypocrite who is more concerned with money than the spiritual needs of his parishioners.  Although he does offer support to Rachel’s mother, his advice is misleading and causes her more anguish.

The ideas which Trollope explores mean that this novel is far from just a “little story”.  Although it doesn’t compete with the complexity and intellectualism of Eliot, it is both charming and thought-provoking, and has further stoked my enthusiasm for his work.