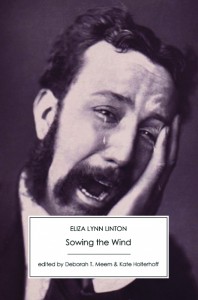 Eliza Lynn Linton is an unlikely heroine for me, given she is best known for her anti-feminist articles ‘The Girl of the Period’ for the Saturday Review. While her journalism alerted readers to the dangers of the New Woman in all her guises, Linton’s novels – quite literally – tell a different story.

First published in 1867, Sowing the Wind features an emancipated woman who bears a remarkable resemblance to Linton herself. Like her creator, Jane Osborn works as a journalist on a daily newspaper, managing to thrive in a masculine environment and to earn the respect of her male colleagues. Linton was actually the first woman journalist in England to earn a salary, and was described by Charles Dickens as “good for anything, and thoroughly reliable”.1 Jane works to support her mother, an endearing but unworldly woman, and her recently discovered cousin, Isola.

The bewitchingly beautiful Isola leads a stultifying existence as the wife of St. John Aylott, a tyrannical popinjay more interested in his appearance than in her happiness. He is a grotesque caricature of the Victorian husband, denying Isola her subjectivity and insisting they must share one mind – i.e. his. As an independent and capable woman, Jane is horrified by her cousin’s circumscribed life:

Sacrifice yourself for a good cause if you like – for the progress of principles, for truth, freedom, humanity – but not to foolish whims and fancies like your husband’s.2

Jane memorably dismisses St. John as an “idiotic bit of millinery”, unable to see the point of a man who is neither manly nor strong. She encourages Isola’s steady transformation from passive ornament to woman of convictions, offering both moral and financial support. Once Isola displays even a modicum of resistance to her husband’s demands, he quickly descends into paranoia, then madness. His tempers and pettifogging are contrasted with Isola’s poise and Jane’s unflagging good sense. As a few scholars have identified, there are marked similarities between Sowing the Wind and Anthony Trollope’s He Knew He Was Right, published two years later.

By pathologising St. John’s behaviour, Linton emphasises that his behaviour is exceptional, rather than representative of Victorian husbands. Yet Isola’s situation is emblematic of that faced by many women before the legal reforms of the late nineteenth century. With no right to control her own money, she is entirely dependent upon the whims of a domestic god. Having recently separated from her husband, Linton was painfully aware that marriage had very different implications for men and women. She might have been terrified by the potential repercussions of a powerful women’s rights movement, but Linton was far too independent-minded to accept the role of conventional wife. Surely, it is the author who speaks through Jane when she declaims:

Ah, you may talk as you like, Isola!—babies, and love, and the graces and prettinesses are all very fine, I dare say, but give me the real solid pleasure of work — a man’s work — work that influences the world—work that is power! To sit behind the scenes and pull the strings[.]3

Jane Osborn is an intriguing avatar. She is described as a “rude, unlovely boy-woman”, and her colleagues call her “good fellow”, Jack, or Johnnie O. Her ‘otherness’ is stressed throughout the narrative – particularly her unkempt appearance and refusal to acknowledge male superiority – but she is undeniably the hero(ine) of the story. Almost twenty years later, Linton would perform an act of literary transvestism by telling her life story as a man in The Autobiography of Christopher Kirkland (1885). Perhaps influenced by the work of Karl Heinrich Ulrichs, she felt that she was the soul of one sex in the body of the other. With lesbianism yet to be or understood, she could express her sexuality only through male-identification.

By the end of the novel, Jane is still an outsider, while Isola’s appropriately feminine behaviour is rewarded. Although Linton isn’t making an especially radical statement about marriage itself, the novel is, nevertheless, highly provocative in presenting a clear alternative for women. Jane might think wistfully of a life partner, but, like Linton, she’d rather be single than married to a man like St. John Aylott. Her attraction to Isola, revealed in tantalising hints, cannot be recognised – instead, her passion must be channelled into work.

Quite apart from Linton’s exploration of sexuality and gender, Sowing the Wind is also a joyous example of the sensation novel, with themes of inheritance, concealed identity, and miscegenation. There’s even a parrot. Linton might be infuriating, but she’s never dull.

Sowing the Wind by Eliza Lynn Linton, edited by Deborah T. Meem and Kate Holterhoff, is published by Victorian Secrets and available in paperback and Kindle editions.

The cover photo for this edition was very kindly provided by Paul Frecker, who runs The Library of Nineteenth-Century Photography. The image actually shows a carte de visite of a man suffering from toothache (a curious choice), but I thought it suggested St. John Aylott’s mental anguish.