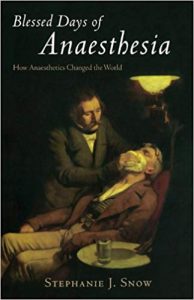 I hadn’t given much thought to anaesthesia until I read a biography of the writer Fanny Burney, who in 1811 underwent a mastectomy while fully conscious.  Extraordinarily she survived, living until the ripe old age of 87.  Burney’s is one of the many stories told by Stephanie Snow in Blessed Days of Anaesthesia, in which she charts the discovery and development of anaesthesia.

The story begins in 1844 with Horace Wells, an American dentist who discovered that nitrous oxide (laughing gas) could eliminate pain during dental surgery.  Unfortunately, his major public demonstration went wrong, leaving his patient squeaking and Wells’ reputation in tatters.  The ignominy was too much for him and he later committed suicide.

It was left to others to exploit and capitalise on this exciting new possibility.  Another American dentist, William Thomas Green Morton, successfully established ether as the anaesthetic of choice, and there was an unseemly struggle amongst his peers to patent the procedure and therefore maximise its earning potential.  Meanwhile, it was the physician and poet Oliver Wendell Holmes who came up with the term “anaesthesia” to describe the remarkable effect of ether on the body.

This groundbreaking discovery soon crossed the Atlantic, although the initial reaction was mixed.  It was John Snow, more famous for his work in identifying the causes of cholera, who seized upon the possibilities of ether, employing it in his surgical work and meticulously recording the results.  He soon developed an inhaler to replace the rather low-tech hanky method.  The trick was to control the inhalation of the ether so that the body would be anaesthetised without impairing any core functions.

Although some doctors were not convinced by this new discovery, others quickly grasped its potential.  An Edinburgh physician, Dr James Mathews, successfully experimented with chloroform, which rapidly overtook ether as news of its benefits spread.  Not all patients responded well to the new drug and there were tragic casualties along the way.  Mind you, it must be said that nineteenth-century surgery was a risky business in any case.   John Snow, however, suffered only one chloroform fatality out of more than 4,500 procedures.

Patrick Brontë was one of the early supporters of anaesthesia.  Having undergone painful cataract surgery in 1847, he could well imagine that the elimination of pain would be a great boon to humanity.  His daughter Charlotte’s immediate response to ether was that she would have her front teeth “extracted and rearranged” (anyone else for nineteenth-century orthodontics?)  Others were more distrustful of anaesthesia, believing pain to be an important bodily response and necessary to the preservation of life force.  Needless to say, it was mainly women who were expected to suffer.  An obvious application of the new wonder drug would be to alleviate suffering during childbirth, but not everyone believed this to be a Good Thing.  Zealous Christians and traditionalists though women should suffer to atone for Eve’s sin, and any attempt to mitigate the pain would allow them to get off far too lightly.
Religious scruples, therefore, stood in the way of many women benefiting in the early days of anaesthesia.  Some men, unwilling to watch their wives suffer, pushed themselves into the vanguard of medical science.  Charles Dickens, not generally credited with being a good husband, insisted, in the face of considerable medical opposition, that Kate should be given chloroform in 1848.  In 1850, Charles Darwin administered the drug to his wife with a hanky after she begged for relief.

Queen Victoria was the most famous recipient of chloroform.  She has a history of difficult births and was becoming increasingly distressed during the weeks leading up to Prince Leopold’s birth.  His impressive record in anaesthesia meant that John Snow was appointed the diminutive monarch’s anaesthetist.  The controversy surrounding this treatment meant that any hint of chloroform had to be suppressed, although rumours abounded.  The medical establishment, represented by The Lancet, condemned the use of anaesthesia in childbirth as irresponsible, and the Queen could not be seen publicly as having taken the ‘easy option’.  Unsurprisingly, however, Snow was thereafter in high demand, and he earned the eternal gratitude of many women.  Sadly, Snow died in 1858, aged only 45 years, but his legacy endured, and his principles of anaesthesia are still recognised today.

Of course, there was also a dark side to chloroform.  Excitable Daily Mail-style editorials reported on helpless victims rendered instantaneously insensible by baddies with chloroform-soaked hankies.  Some people eyed the opportunity of explaining their way out of tricky situations: a solicitor discovered naked in a locked bedroom claimed to have been overpowered by a pair of chloroform-wielding female burglars.  Arthur Conan Doyle fully exploited the narrative possibilities of the drug in his Sherlock Holmes stories, and Anthony Trollope used chloroform for his dystopic vision of enforced euthanasia in The Fixed Period.

One of the many joys of Snow’s book is her interweaving of medical and social history with literature.  In a relatively short account, she manages to embrace a wealth of fascinating detail without ever overloading the reader.  Furthermore, the balanced is pitched just right for the non-expert: Snow doesn’t presuppose detailed medical knowledge, but neither does she feel the need to explain the obvious.  The book is also mercifully free of the breathless narrative style favoured by many current writers of popular science.  The Blessed Days of Anaethesia is an important and absorbing contribution to our understanding of a remarkable medical advance that is so often taken for granted.  I just wish it had been available to poor Fanny Burney.

Blessed Days of Anaesthesia: How Anaesthetics Changed the World by Stephanie J. Snow 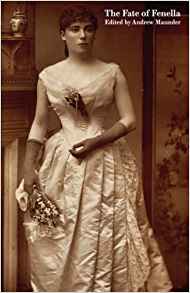