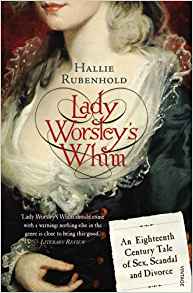 There’s not much that surprises me these days, but Lady Worsley’s Whim managed to repeatedly elevate the papal eyebrows. The story centres around an infamous crim-con trial that took place on 21 February 1782 between Sir Richard Worsley, Governor of the Isle of Wight, and George Bisset, an officer (but not a gentleman) and one-time friend of Worsley. Despite having encouraged a close relationship between Bisset and his wife, Worsley thought it outrageous when the pair ran off together, and claimed £20,000 in damages. Already a wealthy man, the astronomical sum was designed to reduce his enemy to penury.

Sir Richard’s willingness to assign a purely financial value to the loss of his wife was entirely in character. He was a decidedly cold fish who was far more interested in collecting artefacts and bolstering his social status. Impervious to the charms of young heiress Seymour Dorothy Fleming, he had eyes only for her £70,000 fortune (equivalent to around £66m today). Once she had become Lady Worsley and divested herself of both identity and assets, Sir Richard was no longer interested in her. Lady Worsley remained a virgin until three months after their marriage, when her husband reluctantly did his duty and sired an heir.

Bored witless with little to distract her, Lady Worsley made her own entertainment. On one occasion she and two friends went on a three-day rampage, culminating in setting fire to a room in an inn:

‘How do you think they quenched the flame their own fair selves had caused? They did not call water! Water!, it was more at hand …’ these three well-bred young ladies, who had been taught to dance, embroider and lisp sweetly in French, lifted their silk skirts ‘and fairly pissed it out …’

Even this distinctly unladylike behaviour was insufficient to attract her husband’s attention.

When Sir Richard met Bisset, he thought his prayers had been answered. Here was a dashing officer who fulfilled his homosocial needs and his wife’s sexual appetites. Bisset was invited to live with the couple in a bizarre ménage à trois, with Sir Richard acting as voyeur while the other two amused themselves. He even seemed nonplussed when his wife became pregnant with Bisset’s child. This phlegmatic husband made little attempt to disguise his complicity in his wife’s liaison – at one crucial point he allowed Bisset to stand on his shoulders so he could watch the naked Lady Worsley getting dressed after a swim. This was to become ‘the most regrettable day of his life’, as we shall see.

Bisset and Lady Worsley’s relationship blossomed into love and they decided it would be quite nice to enjoy one another without her husband peering at them. They crept off into the night on 19 November 1781, taking up residence in a London hotel. Sir Richard finally discovered some virility at this point. Adultery was one thing, but his wife had destroyed the sanctity of marriage and his friend had thumbed his nose at the fraternal bond. Humiliated by his cuckold’s horns, Sir Richard invoked the full force of husbandly privilege, denying his estranged wife both money and any of her personal effects. She had only the clothes she wore on the night of the elopement and was entirely reliant on her lover, despite having provided an impressive dowry. As a wife, she had no right to her other clothes and jewels, worth an astonishing £15 million in today’s money.

The subsequent court case didn’t reflect well on anyone. As a mere woman, Lady Worsley had no right to defend herself, and the only tactic left to her was to prove she wasn’t worth the £20,000 damages claimed by Sir Richard. A seemingly endless succession of young bucks took to the witness stand to testify to having satisfied Lady Worsley’s whims, thereby branding her a worthless trollope. The judge consequently awarded damages of just one shilling, also denouncing the wronged husband as a foolish pervert. The crux of the case was his encouraging Bisset to watch his naked wife, so it was very clear that he had brought about his own downfall.

Perhaps inevitably, Bisset soon tired of his notorious lover and found himself a respectable wife.  The redoubtable Lady Worsley ended up in revolutionary Paris, embarking upon a new life and many adventures. Fortunately, Sir Richard died young enough for her to reclaim some of her fortune and find happiness with a much younger husband. Lady Worsley’s tenacity is both astonishing and humbling. Although rendered impotent by the law, she refused to tolerate the machinations of her sadistic, calculating husband. At a time when the only thing wives possessed was their virtue, she was willing to sacrifice it in order to extricate herself from an invidious position.

Hallie Rubenhold has done her subject justice by allowing her story to be heard and also setting it carefully in its historical context, thereby emphasising the remarkable nature of Lady Worsley’s actions. Rubenhold’s narrative skill is as remarkable as her subject. I found it impossible to put the book down and my knuckles were white from gripping it so tightly through all the twists and turns. The historical and legal detail is skilfully interwoven with the story, without either dominating or slowing it down. An extraordinary book about an extraordinary woman.

Lady Worsley’s Whim is available in paperback and Kindle editions.