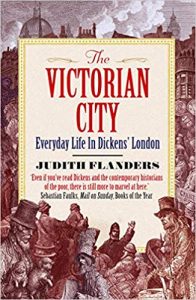 Much as I would like to pay a visit to Victorian London, I fear my acute olfactory sense would send me scurrying back to the 21st century. Fortunately, in The Victorian City Judith Flanders has allowed me to experience the sights, sounds and dubious smells of the heaving metropolis without leaving my armchair.

During the nineteenth century, London’s population doubled, exacerbating the problems of poverty and squalor that have become so emblematic of the age. While Charles Dickens is famed for his literary imagination, he was also a keen observer of the life that teemed all around him. He thought nothing of walking 30 miles per day (and often by night), and during these excursions would chronicle tiny details of the era that has come to be named after him. As Flanders points out, “in Dickens’ own time, the way people lived was not Dickensian, merely life,” and it was a hard life. Young watercress-sellers would tramp the streets for hours on end, just to earn a few pence – hopefully enough to buy them a hot potato or some whelks on the way home. Pie-sellers also scratched out a meagre leaving, their margins eaten away by the Corn Laws. To the delight of small boys, however, they would always toss a coin: if the customer won, he got the pie for free.

Those with better-paid work could afford to take the omnibus, but that was precarious mode of transport. In the 1840s, buses were equipped with straps that ran along the roof and were attached with hooks to the drivers’ arms. When passengers wanted to alight on the left-hand side of the road, they pulled the left strap, and vice versa, with inevitable results. While a coach might guarantee more control over the final destination, it was not conducive to conversation. As Flanders observes, the noise would have been deafening – what with the horse’s hooves, the wheels, and the general throng – and Dickens’ characters would often ask the driver to stop so that they might hear one another speak.

Although Dickens is central to the narrative, Flanders deftly handles a variety of voices, including George Augustus Sala, Arthur Munby, and even ‘Walter’, the pseudonymous author of the eleven-volume erotic memoir My Secret Life. What emerges from the cacophony of Victorian London is a clear and captivating evocation of what it must have been like to live in this extraordinary age. The detail is meticulous but never ponderous, and nothing fails to fascinate. The Mayhew-style vignettes of people and places are punctuated by insights into key events that encapsulate London life: the Berners Street Hoax, the Tooley Street Fire, the Regent’s Park Skating Disaster, and the funeral of the Duke of Wellington.

Fellow Victorianists will delight in the wealth of information this book contains and Flanders is a perfect tour guide for the Victorian City: insightful, intrepid, witty and engaging.

The Victorian City: Everyday Life in Dickens’ London is available in hardback and Kindle editions. I am reliably informed that Primrose Hill Books will send copies with personalised dedications anywhere in the world.