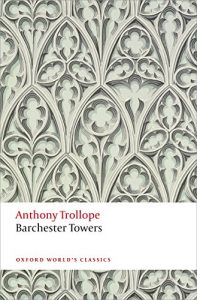 Although readers often struggle with The Warden, their efforts are amply rewarded by Barchester Towers (1857), the next novel in the Barset Chronicles. The story begins with the death of the Bishop, followed by a great deal of manoeuvering amongst those who seek to fill the much-coveted position. The triumphant candidate is Thomas Proudie, although it is his wife who wears the cassock in their household. Mrs Proudie – the “Medea of Barchester” – is perhaps Trollope’s most famous character and one of his finest comic creations. The plot mainly concerns her battles with the ambitious and oleaginous Obadiah Slope, who is determined to bend the Bishop to his will. The confrontations between Mrs Proudie and Slope are brilliantly drawn and sublimely funny. Bishop Proudie himself is a study in inertia and simply defers to whichever of the two rivals happens to be in the ascendant.

Not content with seeking political advantage, Slope also resolves to secure for himself an advantageous marriage, having no mean opinion of his appeal to the opposite sex. He has his evil eye on Eleanor Bold, the recently widowed and wealthy daughter of Septimus Hardy, but is distracted by the specious charms of Signora Madeline Vesey Neroni. Although permanently crippled by her estranged husband, Madeline proves irresistible to the men of Barchester, much to the disgust of their womenfolk, and uses her power to deadly and comic effect. Slope is no match for her, or indeed for any of the other formidable women he attempts to conquer. It takes a hard slap in the face from Eleanor to convince him that his attentions are unwelcome.

Eleanor Bold is one of Trollope’s strongest female characters. Independently wealthy, she is “fair game to be hunted down by hungry gentlemen”, but bats them away vigorously, refusing to accept that she should be grateful for proposals from importunate suitors. Eleanor shows dignity, courage, and spirit beyond that permitted to many Victorian heroines. It is unfortunate, therefore, that Trollope ultimately reduces her to wifely submission when she finally does remarry:

She has found the strong shield that should guard her from all wrongs, the trusty pilot that should henceforward guide her through the shoals and rocks. She would give up the heavy burden of her independence, and once more assume the position of a woman and the duties of a trusting and loving wife.

Possibly Trollope lost his nerve and decided that leaving Eleanor independent and happy at the novel’s conclusion would create an alarming precedent.

His portrayal of Madeline remains radical, however. There are relatively few clear depictions of marital violence in nineteenth-century fiction, but Trollope makes little attempt to obfuscate Madeline’s sufferings:

She had fallen, she said, in ascending a ruin, and had fatally injured the sinews of her knee; so fatally that when she stood, she lost eight inches of her accustomed height; so fatally that when she essayed to move, she could only drag herself painfully along, with protruded hip and extended foot, in a manner less graceful than that of a hunchback. She had consequently made up her mind, once and forever, than she would never stand and never attempt to move herself. Stories were not slow to follow her, averring that she had been cruelly ill-used by Neroni, and that to his violence had she owed her accident.

Trollope’s handling of such a harrowing issue could easily weigh down the entire narrative, but he undercuts the tragedy with the ludicrous reactions of the other female characters to this exotic creature:

“But you say she has only got one leg!”
“She is as full of mischief as tho’ she had ten. Look at her eyes, Lady De Courcy. Did you ever see such eyes in a decent woman’s head?”

Some of the humour elsewhere is perhaps unintentional, the following innuendo-laden scene a good case in point:

Maybe I’m just being smutty, but Trollope is not averse to the occasional double entendre in his other fiction.
Barchester Towers manages to be entertaining, incisive and provocative, and is representative of Trollope’s talents and range. It lacks a strong narrative arc, but with such superb characters and scenes, it is hardly necessary. In his Autobiography, Trollope wrote: “In the writing of Barchester Towers I took great delight.” His delight is evident on every page.