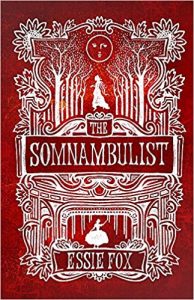 Imagine an intoxicating narrative with more twists and turns than Downton Abbey (without the red flags), and flashes of M R James, Sarah Waters, and Wilkie Collins. That is what Essie Fox has achieved with her debut novel, The Somnambulist, a story that continues to haunt the reader long after the final page has been reached.

Phoebe Turner is a 17-year-old girl living in the East End of London with Maud, her Evangelical Christian mother. Maud has declared implacable war on sin, campaigning for theatres and bars to be closed and an end to all fun. She disapproves of her glamorous sister Cissy who sings on the stage at Wilton’s Music Hall, although Phoebe adores her. When Cissy dies of an overdose, Phoebe is distraught and finds herself trapped in a circumscribed and impoverished world. There is a welcome turn of events when the wealthy and mysterious Nathaniel Samuels offers her a position as companion to his wife. Leaving her old life behind, Phoebe travels to Dinwood Court, the Samuels’ labyrinthine Herefordshire mansion, described disarmingly as an “idyll of peace and perfection, an oasis, an Eden, a heaven on earth.” Lydia, her laudanum-addicted mistress, is a complete recluse with a tendency to sleepwalk and mutter about her troubled past. Phoebe is inexorably drawn into the family’s dark web of lies, gradually uncovering the truth about both them and herself.

Essie Fox creates an almost unbearable level of tension, and Phoebe’s terror is at times palpable as she embarks upon a long awakening. The plot seems to follow a well-trodden path, but suddenly veers off in an entirely different direction, with the author cleverly subverting classic sensation novel tricks.

As creator of the super Virtual Victorian blog, Essie’s eye for detail is extraordinary and accurate, with her scenes vividly drawn. Fin-de-siècle London is brought to life with an eerie glow, contrasting with the dazzling opening scenes set at Wilton’s. The descriptions of Dinwood Court are a delicious Gothic confection with spookiness lurking behind every door, like a malevolent advent calendar.

The sleepwalking theme suggested by the title is cleverly adumbrated throughout the novel, with a pervading sense of ghostliness and phantasmagoria. There are more literal allusions, too, with references to Millais’ painting The Somnambulist, which recently sold at auction for a surprisingly low £75K and was said to have been inspired by The Woman in White.

The Somnambulist is an exciting, intelligent and compelling novel, and I can’t wait for the next one. Glorious.

The Somnambulist is available in hardback and Kindle editions. There’s also a stunning website to accompany the book.

Published anonymously in 1935, The Bazalgettes is a spoof Victorian novel by E M Delafield, best known for her highly entertaining Diary of  Provincial Lady series.  The story is set in the 1870s and centres on young Margaret Mardon, who is so desperate to escape her unhappy family home that she determines to accept the first marriage proposal offered.  A suitor appears in the form of 64-year-old widower Sir Charles Bazalgette, who essentially wants a mother for his unruly brood of five children.  Margaret accepts his proposal with alacrity, becoming “the third of her husband’s experiments in wedded bliss”.

Although Sir Charles is aloof and completely uninterested in his young wife, Margaret does her best to be a good mother and resigns herself to the disappointment of married life.  All is well until she discovers the existence of another stepson, Charlie, who is a few years older than herself and the son of Sir Charles’ mysterious first wife.  When Charlie pays a visit, Margaret encounters “six-foot-three of muscular good looks” and falls head over heels in love with him.  Her feelings are entirely reciprocated, thus placing the lovers in a difficult position.  Margaret realises that an expedient marriage has left her thoroughly miserable, and she loses interest in everything – at least until, in true Victorian sensation style,  she is rescued by a twist of fate.

Meanwhile, her sister Julia, equally desperate to escape the family home,  has fallen for the dubious charms of poet and aesthete Theodore Blanden, who is surely inspired by Bunthorne in Gilbert and Sullivan’s Patience.  He writes verse in the style of Chaucer and woos her with his latest work, ‘Blyth runs the Blud in Springe’:

Blyth runs the Blud in Springe, my Swete,
Nu hosen alle men wear
Yonge maidens pluck the nettyl-leves
And twyne about their hayre,
Then shippity, then hoppity, then sing ye springe with me!

The novel abounds with such comic creations and Delafield’s characteristic acerbic wit.  The arch, lighthearted style is reminiscent of Rhoda Broughton, as is the plot device of contrasting the fortunes of two sisters, and causing excitement by the sudden introduction of beefcake.  Although delightfully entertaining, it doesn’t succeed as a convincing Victorian novel.  Nineteenth-century attitudes are rather bolted on to the plot, and many of the characters simply enjoy far too much latitude, given their societal position.  Also, the dénouement (which I shan’t spoil) is utterly unconvincing to anyone familiar with Victorian sensibilities.  Notwithstanding my customary pickiness, it was a thoroughly enjoyable read, and one of the earliest examples of neo-Victorian fiction.

E M Delafield’s novel The War-Workers is available through our Twentieth-Century Vox imprint.