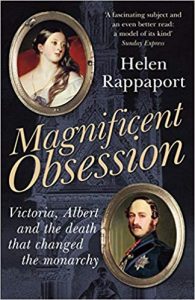 One hundred and fifty years ago today, Queen Victoria and her subjects were plunged into mourning following the untimely demise of the Prince Consort. Albert’s death threw an enormous wet blanket over the social season, with the cancellation of balls, concerts, and soirees. For appearances’ sake, Charles Dickens was obliged to postpone a lucrative series of public readings, which must have really smarted.

Those of more modest means that the Inimitable Boz wondered how on earth they would afford to put their families in mourning. Manufacturers, meanwhile, rubbed their hands with glee, greedily anticipating a boost to their profits as the trade in commemorative items and dark-coloured clothing boomed. It’s an ill wind.

Although normal life was soon resumed for the nation, Victoria’s life had stopped on 14 December 1861. As Helen Rappaport notes: “Like Dickens’s Miss Havisham, she had no desire to move forward but only to remain in stasis, locked into that terrible moment of loss, in perpetuity.” The Prologue describes exactly what the Queen had lost: a blissfully happy marriage (at least from her point of view) and the stability of an intelligent, supportive husband. With arguably the most demanding job in the country, and nine children, Victoria relied on her husband to take care of domestic affairs: “Quite simply, he was all in all to her: surrogate father, husband, best friend, wise counsel, amanuensis and teacher — King in all but name.”

The description of the family’s last Christmas together is both beautiful and moving, brought to life by Rappaport’s sumptuous prose.

The chandeliers had to be taken down specially to accommodate the larger ornamental trees, which were securely suspended from the ceiling, their bases resting on the table. The ten rows of symmetrical branches of these trees were decorated with edible fancies: sweetmeats, little cakes, fancy French bonbons, gilt walnuts — and gingerbreads whose delicious aroma filled the air — the effect completed with coloured ribbons and wax tapers and a frosting of artificial snow and icicles. At each tree-top stood a Christmas angel of Nuremberg glass, its outstretched wings holding a wreath in each hand.

This poignant event is contrasted with Christmas 1878, where the still-grieving Victoria is contending with the death of her daughter, Princess Alice, who also passed away on 14th December.

As Rappaport shows, Queen Victoria formed an addiction to mourning and, more specifically, to the sympathy it allowed her to demand from family and servants. Whereas most widows would have thrown off their weeds after a couple of years, Victoria maintained hers for nearly two decades, refusing to perform public duties she thought inappropriate to a bereaved woman. It is this image of the grim-faced, black-clad matriarch that has endured, rather than the lively, playful young queen of her early reign.

It suits most historians to claim that Victoria remained the reclusive Widow of Windsor for the rest of her days, thereby overlooking her considerable industry during the last quarter of the nineteenth century. Rappaport, conversely, describes how Victoria finally emerged from the shadow of death and found the courage to go on, realising at last that she possessed the skills necessary to be a great monarch: “her natural intelligence, the force of her indomitable personality and her great powers of endurance.”

Rappaport’s frustration with Queen Victoria is palpable at certain points, which is unsurprising given the monarch’s breathtaking solipsism and self-indulgence. No reader can fail to feel anger at her refusal to believe that Albert was ill, simply because it was inconvenient to her and distracted attention from her own preoccupations.

This account is scholarly, yet compelling and highly readable. The story is placed in unobtrusive, meticulous historical context, and the archival research is impeccable. Although much has been written about Victoria’s long reign, it has seldom reached this superlative standard. Rarely have I encountered a book that has satisfied in so many different respects.

Magnificent Obsession: Victoria, Albert and the Death that Changed the Monarchy  by Helen Rappaport. Also available in a Kindle edition. Victorian Secrets publishes Helen Rappaport’s No Place for Ladies: The Untold Story of Women in the Crimean War.