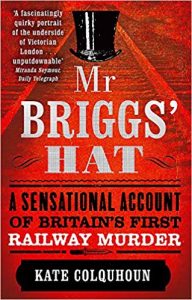 There is something pleasingly understated about a book called Mr Briggs’ Hat. This seemingly ordinary item of apparel became key to one of the most famous murder cases of the nineteenth century, inspiring terror among the commuters of the heaving metropolis.

On the evening of 9 July 1864, Thomas Briggs, a 69-year-old bank clerk, boarded a train at Fenchurch Street. It should have taken him to his home in Hackney, as it had done hundreds of times before. However, the train arrived without Mr Briggs, and all that remained of him in his blood-soaked compartment was his bag and stick, along with a crushed hat that wasn’t even his. Although the blood actually sloshed through to the next compartment, there were no witnesses to the crime – this was a classic locked-room murder. It only became apparent what had happened when Briggs’ battered body was found by the railway tracks, and without his gold watch or hat.

Unsurprisingly, such a dramatic crime attracted a media frenzy, and the police were under enormous pressure to find the culprit. Not only was this the first murder on a British train, the victim was also a gentleman. Furthermore, he’d been travelling in a first-class compartment, where decent folk ought to be safe.

Officers soon apprehended a young German tailor called Franz Müller, who was found to be in possession of the stolen items and also seemed likely to have the missing hat. He sailed to America a few days after the murder, thereby making him appear more guilty. Although this evidence seemed fairly conclusive, the case was frustratingly complicated, with Müller able to provide rational explanations for what appeared to be damning evidence. The press delighted in stirring up xenophobic feeling against the suspect, leaving him little hope of a fair trial.

This seemingly simple case contained more twists and turns than a Victorian potboiler and they are skilfully chronicled by Kate Colquhoun. The narrative is well paced, with just the right amount of historical context, and the atmosphere is created in such a way as to make it utterly absorbing. The reader is kept guessing throughout by the ever-shifting composite view of characters and events.

Apart from this fine book, the legacy of the Briggs’ murder was the introduction of communication cords on trains and also windows between compartments, amusingly called Muller lights. Also, it changed people’s perception of their own safety. As Colquhoun writes:

The fact that the attack occurred on a railway train emphasised a terrifying new reality: that technological cleverness had spawned progress and wealth, but at a cost. It suggested that the price to be paid for modernity was, even for the most privileged in society, vulnerability and death.

The curious case of Mr Briggs’ hat was a pivotal moment in the Victorian age, and its dramatic significance is captured perfectly in this book.

Mr Briggs’ Hat is available in paperback and Kindle editions.