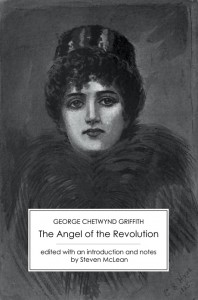 I must confess to a degree of scepticism on receipt of a proposal to publish The Angel of the Revolution, George Chetwynd Griffith’s 1893 tale of air warfare. Sci-fi generally resides in my Room 101 and has no place on the papal bookshelves. Imagine my surprise at finding myself completely gripped by a fantastical story in which an intrepid group of Socialists, Anarchists, and Nihilists defeat Capitalism with their superior knowledge of dirigibles (my new favourite word). Led by a crippled, brilliant Russian Jew and his daughter, Natasha, The Brotherhood of Freedom establishes a ‘pax aeronautica’ over the world, thanks to the expertise of scientist Richard Arnold.  Arnold falls in love with Natasha (the eponymous Angel), and Griffith builds a utopian vision of Socialism and romance.

The story moves at a rollicking pace and there’s never a dull moment. Griffith is also remarkably prescient in predicting future technology, including air travel, tidal power, and solar energy (showing far more imagination than Trollope in The Fixed Period). But it is his treatment of social responsibility that makes the novel particularly interesting in the current economic climate. Griffith imagines a world in which the wealth of the obscenely rich is sequestered, their property seized for the public good, and their businesses nationalised. Those with unearned incomes are forced to either pay punitive tax, or to undertake equivalent labour in the community. I’m not sure it would work as a blueprint, but it does show such debates are timeless.

Unsurprisingly, I know precisely nothing about aeronautics, but Steven McLean shows in the introduction and appendices how Griffith contributed to discourses on air travel. He clearly knew what he was talking about, as his son went on to invent the Rolls-Royce Avon jet engine. Griffith himself stuck with fiction, including A Honeymoon in Space, the story of a newly-married couple who use a spacecraft powered by anti-gravity to tour the solar system (as you do). That will be my next foray into science fiction. I’m not a convert, you understand, merely sci-fi curious.

The Angel of the Revolution by George Chetwynd Griffith is available in print and ebook editions.