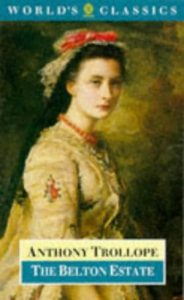 The Belton Estate (1865) is the story of a young woman, Clara Amedroz, who vacillates between two suitors: her bucolic but passionate cousin Will, who is heir to her father’s entailed farm, and Captain Aylmer, an urbane but unemotional MP who is tied to his rebarbative mother’s apron strings.  The narrative reflects the Jane Austen novels read by Trollope during the 1860s, and they inform his portrayal of an impecunious unmarried woman.  With no income of her own and an ailing father, marriage is Clara’s only means of survival, and she struggles with her impending dependence on the men who surround her.  She dramatically articulates her frustration: “I think it would be well if all single women were strangled by the time they are thirty.”  The sub-plot, involving Captain and Mrs Askerton, deals with society’s intolerance towards others marital misfortunes (an echo of Dr Wortle’s School) and it also serves to highlight both Clara’s humanity and the superficiality of one of her suitors.

Clara’s position must have been particularly resonant for many of Trollope’s female readers.  There was a growing surplus of women that was soon to reach one million – a situation memorably explored in George Gissing’s The Odd Women.  An intelligent spinster of Clara’s class, with no independent income, often had little option but to become a governess, a position that was only marginally superior to domestic service in terms of conditions and pay.  Real women couldn’t simply live on their wits like Becky Sharp and Lydia Gwilt.

Trollope recognised the difficulties faced by women: “the world is harder to women than to men; that a woman often loses much by the chance of adverse circumstances which a man loses by his own misconduct.”  The passivity demanded of a nineteenth-century woman left her with scant control over her own destiny.  Although Trollope is mindful of that fact, he doesn’t offer any solutions, his innate conservatism cleaving him to the laws of primogeniture and the idea of wifely submission.  He can appreciate the intellectual argument for female emancipation but recoils emotionally from the concept of women having a viable alternative to marriage.  Indeed, Trollope described himself as “an advanced, but still a conservative Liberal.”  During the parliamentary elections, Captain Aylmer campaigns on a ticket of repealing the Matrimonial Causes Act, a recent piece of legislation which, at least theoretically, made it easier for women to divorce unsuitable husbands and laid the foundations for more progressive reform.  He was reaching out to middle-class men who resented the intrusion of the state into their private lives and sought to retain the sexual double standard.

In his introduction to the Oxford World’s Classics edition, John Halperin accurately describes the novel as being about “the pathology of desire and indifference”.  As such, it seems remarkably slow and tame when compared with the sensation novels that characterised the literary period.  Henry James wrote “we slumber on gently to the end” and the Athenaeum found that “the story drags”.  Trollope himself thought it unmemorable when surveying his oeuvre in his Autobiography (1883).  The novel’s merits certainly do not lie in its originality of plot or incident, but his portrayal of Clara Amedroz is an early triumph of the realist school.  As such, the novel can be seen as an experiment – The Fortnightly Review, the periodical in which it was originally serialised, was a proponent of realism.  Although forward-thinking in his style, and also giving consideration to some of the social issues of the day, the novel’s conclusion is essentially conservative.  Trollope perhaps speaks through Clara when she says: “I’m not prepared to alter the ways of the world, but I feel myself entitled to grumble at them sometimes.”