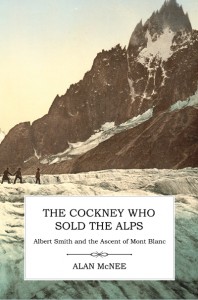 As someone with an aversion to the outdoors, I prefer to experience nature vicariously. Preferably with a G&T in my hand. Had I been shuffling around in the nineteenth century, I’d have no doubt found my way to Albert Smith’s ‘Ascent of Mont Blanc’ show at London’s Egyptian Hall. Audiences were mesmerised by a diorama that gave the impression they were participating in an Alpine adventure – all from the safety of a plush seat in Piccadilly.

Smith, in full evening dress, would appear on the stage giving a ‘rattling and rapid description of the journey from town to Dover; then the run across the channel and the Continent, till in a few minutes he brought the audience to Switzerland itself’. The proscenium was designed to resemble a two-storey Swiss chalet, complete with shutters and balcony. Behind it lay rocks and a miniature lake, stocked with live fish. Alpine plants adorned the display, along with appropriate accoutrements, such as knapsacks, alpenstocks, and Swiss hats. As Smith described the journey, the Swiss chalet would rise of sight to make way for the painted canvases, depicting scenes along the way. The interval was marked by the arrival of St. Bernard dogs bearing boxes of chocolates for the children. In the second act, the images moved in a continuous descending panorama to give the impression of the ascent in progress.

Audiences loved it. The first performance took place on 15 March 1852, and it ran for seven seasons – a total of 2,000 shows. Alan McNee estimates that around 800,000 people watched ‘The Ascent of Mont Blanc’, placing it in the league of modern West End musicals. By the second season, The Times remarked that ‘the exhibition now seems to be one of the “sights of London” – like St. Paul’s and Westminster Abbey and the Monument’. Initially sceptical of the show’s appeal, Thackeray later wrote to his daughters: ‘it was so amusing that you don’t feel a moment’s ennui during the whole performance – a thousand times more amusing than certain lectures and certain novels I know of’.

While many people were content to enjoy the ascent vicariously, others were inspired to pursue a hands-on approach. Smith’s show inspired ‘Mont Blanc mania’, encouraging participation in mountaineering as a popular pursuit. Tour operators such as Thomas Cook were quick to capitalise on the opportunity, conveying eager holidaymakers over to the continent. Smith might have spiced up the leisure time of the more affluent working classes, but not everyone was happy with this transformation. Leslie Stephen (more famous now as the father of Virginia Woolf) was horrified that the Alps were no longer the exclusive preserve of the upper middle class.

Smith’s own ascent of Mont Blanc is the most remarkable episode in this absorbing story. Rather portly in stature and no Bear Grylls, he nonetheless succeeded in scaling the highest peak in the Alps. Although he benefited from local guides, Smith was using equipment that would horrify a twenty-first-century mountaineer. And for much of the ascent, he was three sheets to the wind. He probably wasn’t drunk, as such, but had certainly consumed an inadvisable quantity of alcohol (even a small amount of booze intensifies the unpleasant effects of altitude). Of course, in the mid-nineteenth century, there were no dehydrated meals or sachets of high-energy gel – all the provisions for the ascent had to be carried by the party. And what an impressive list of provisions it was:

Clearly, an audacious attempt on an intimidating mountain was no reason to let culinary standards slip. Smith’s story shows how far you can get with determination, perseverance, and a large dose of chutzpah. John Ruskin, however, was unimpressed, noting with contempt that there had been a “Cockney ascent of Mont Blanc”.

Smith’s successes were legion, but he didn’t get to the top without making a few enemies along the way.  His bumptiousness made him a divisive figure, and his relentless drive to seize every opportunity often gave the impression of a grasping and ruthless nature. He numbered William Makepeace Thackeray, George Augustus Sala, and Charles Dickens among his friends, but fell out with all of them at different times. Most notably, he made an enemy of Dickens after becoming embroiled in the unpleasantness surrounding Dickens’s affair with Ellen Ternan.

Although he died aged only 43, Albert Smith managed to pack much incident into his short life. He was robbed by highwaymen in Italy, narrowly escaped death in a hot air ballooning accident, and dodged arrest in Paris during the June Days Uprising of 1848. Ever the showman, he made good use of these events in his journalism and also on the stage. Even Queen Victoria described him as “inimitable”, an epithet that Dickens famously liked to apply to himself.
I must confess that I’d never heard of Smith before I received the proposal for this entertaining and enlightening book. I was delighted to meet him, albeit at a distance of 150 years. As a man, he’s hard to like, but as a showman he’s impossible to resist.

The Cockney Who Sold the Alps: Albert Smith and the Ascent of Mont Blanc by Alan McNee is available in paperback and Kindle editions.