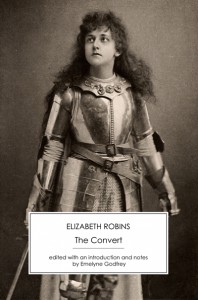 Last year saw the 100th anniversary of the death of Emily Wilding Davison, the brave and determined suffragette who attempted to stop the King’s horse during the Epsom Derby. Many have decried the foolishness of such acts, believing that female suffrage would somehow have happened spontaneously, if only these silly women had been patient; others, however, knew that direct action alone would stimulate a response from an apathetic political elite.

Elizabeth Robins, an American actress and author, advocated militancy as the only way of achieving equality, lending her considerable talents to the campaign. Her play Votes for Women! was performed to packed houses after premièring at the Royal Court Theatre in 1907. Directed by Harley Granville Baker, and with input from Henry James and George Bernard Shaw, the production was a resounding hit with critics. As part of her research, Robins attended numerous suffragette meetings and rallies, using some of the dialogue verbatim. In a scene set during a Trafalgar Square protest, the actresses playing the suffragettes even interacted with the audience – much to their delight.
Having divided the proceeds between the WSPU and NUWSS, Robins decamped to the country and started re-writing the play to produce what is now her best-known work, The Convert, published in 1907. As an established novelist, Robins correctly predicted that this format would garner even more publicity for the suffrage cause. The dramatic structure of the play is evident in the novel, giving it tautness and pace; the lively and authentic dialogue also brings some of the atmosphere of the theatre production to the page.

The story centres on Vida Levering, a society beauty who turns personal tragedy into political triumph by throwing her considerable intellect and energy behind the campaign.  She also uses a guilty secret to gain the support of her ex-lover, rising Tory politician Geoffrey Stonor. In Robins’ novel, the militants are portrayed as noble women who care passionately about their cause, rather than as the bitter troublemakers of popular myth. The quotes from hostile men who turned out to heckle the campaigners are taken from real events, showing the danger these women were prepared to endure in order to stand up for their principles.

Although this is a polemical novel, it is also funny and poignant, giving the reader a sense of what it would have been like to have witnessed these tumultuous and momentous times.

The Convert is available in paperback and Kindle editions.