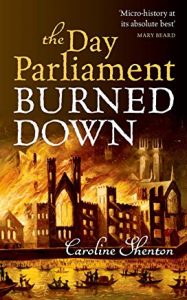 “Never was a spectacle so much enjoyed,” wrote Letitia Landon of the fire that destroyed the old Palace of Westminster on 16th October 1834.  Hundreds of thousands of people gathered to watch open-mouthed, as eight centuries of tradition went up in smoke. There was no need to inform King William IV of this terrible event – the flames were clearly visible from Windsor Castle, some twenty miles away. Queen Adelaide allegedly deemed the fire “divine retribution” for the great Reform Act of 1832, which had egregiously extended the franchise, bringing the country perilously close to democracy. Others saw it differently: an elderly man was arrested for cheering in delight, “This is what we wanted – this ought to have happened years ago.” But there was no agency involved; incompetence had succeeded where Guy Fawkes had failed.

Lord Melbourne referred to the fire as “One of the greatest instances of stupidity on record,” and it’s difficult to disagree with him. The problem started when staff set about burning tallies, wooden sticks that had been used as receipts in an old sinecure-ridden department. The immense heat generated melted the copper flues under the Lords’ Chamber and then the blaze took hold. Although floors were burning hot and almost unbearable to stand upon, staff merely commented “hmm, it’s a bit toasty in here,” while hopping from foot to foot. In the grip of inertia, they declined to take action until it was too late. When a visitor commented on the heat and smoke, deputy housekeeper Mrs Wright informed him there was nothing to worry about. By 6.30pm, flames exploded from the roof and astonished bystanders were treated to an unprecedented display.

Fortunately, other people conducted themselves with more professionalism, such as James Braidwood, superintendent of the London Fire Engine Establishment, who bravely fought to control the fire, and Thomas Phillipps, a distraught antiquary who desperately tried to rescue irreplaceable parliamentary records from the flames. Heroism was not restricted to bipeds – Chance, the fire brigade dog, leapt straight into the centre of the action, although his precise contribution is unknown.

In The Day Parliament Burned Down, Caroline Shenton provides a gripping hour-by-hour account of the conflagration and its immediate aftermath. The clever way in which the day unfolds gives the reader a sense of being themselves an eyewitness, albeit from a safe distance. Shenton embraces a rich array of material, from the official enquiry report, through to private letters and diaries. Although the focus is on one day, it is set neatly within its historical context, recreating a vivid sense of a tumultuous age characterised by poverty and protest. This book is history at its best, told by an historian with a firm grasp of her subject and talent for telling a story.