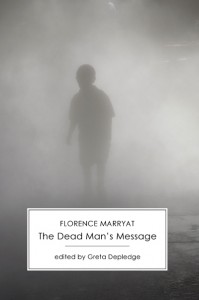 The Dead Man’s Message (1894) is an intriguing novella in which a vivisectionist, Professor Aldwyn, enters the spirit world after death and is forced to account for his actions on earth.  Previously a rational man of science, he realises that neglecting his spirituality has had disastrous consequences.

The plot is refreshingly unconventional, with the protagonist dying at the beginning of the narrative.  We see him leave behind his temporal husk and travel to the “other side”, where he encounters the animals on which he experimented, and also his first wife, Susan, who he treated abominably.  He must do penance for his abuses, and also observe the happiness of his second wife (still on earth), who embarks upon a new life.  Rather like Scrooge, his spirit guide escorts him back to earth so he can hear the opinions of those to whom he behaved badly during life.

Marryat, who herself suffered at the hands of a tyrannical husband, uses this gothic tale to suggest that bad behaviour in marriage will be punished in the next life.  The spirit world that she depicts embodies a more egalitarian society in which women are no longer subordinate, and are “partners” rather than wives.  Although she endured a miserable marriage on earth, Susan is rewarded with a loving partner and a brood of spirit offspring.  She is also able to watch over her children who are still living, and her ghostly presence appears in a photograph taken of her daughter, warning her not to make an unsuitable marriage herself.

This edition also includes articles on the Science versus Spiritualism debate and spirit photography, and also extracts from Marryat’s non-fiction work, There is No Death.  The introduction by Greta Depledge discusses the representation of vivisection and the novella’s wider context.

I would be the first to admit that Florence Marryat isn’t the greatest Victorian writer, but she is certainly one of the most interesting.  The Dead Man’s Message is a fine example of her best work.