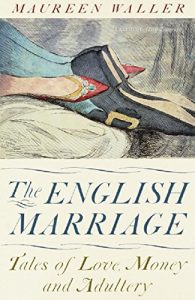 Following his umpteenth divorce, Rod Stewart remarked that he wouldn’t get married again – he would simply find a (presumably blonde) woman he didn’t like very much and give her a house. Reading Maureen Waller’s The English Marriage, I can’t say I blame him. There is very little love to be found in these pages, rather an abundance of violence, infidelity, and fraud. Each chapter focuses on a particular marriage and the outrage it embodied, whether it be wife-sale (yes, Hardy wasn’t making it up), bigamy, or old-fashioned adultery. These stories are interspersed with enlightening extracts from conduct manuals. My favourite of these is clergyman William Gouge’s Domesticall Duties (1622), which decrees that a married woman must maintain “an inward, wife-like fear”.

This quote provoked much snorting from my own spouse, but it is easy to forget that no sense of irony was meant at the time. Until 1882, a married woman had no separate legal existence and all that she owned belonged to her husband. Before 1870, she didn’t even have a right to her own earnings. It was a man’s duty to support his family, a responsibility for which he was rewarded with the power to chastise them in any way he saw fit.

Perhaps the clearest illustration of the inequitable position of women in the mid-Victorian period is that of Susannah Palmer. Her husband repeatedly used her as a punchbag, regularly blackening her eyes and knocking out her teeth. After years of suffering such relentless brutality, she absconded with the children and managed to support them single-handedly. Once she was settled, her husband tracked them down, seizing and selling all the possessions she had worked hard to acquire. Not content with parasitism, he attacked her while she was preparing her children’s supper. While he was clouting her around the head, she inflicted a slight cut on his hand. Outraged at this insubordination, he immediately summoned her for “cutting and wounding” him and she was sent to Newgate prison (where she expressed perfect contentment, being at a safe distance from her husband’s fists).

The great libertarian J S Mill lamented the fact that theft was punished more severely than wife-beating. But, as Waller glumly acknowledges: “it all came down to property in the end. A man mistreated his wife because he believed she was his possession to do what he liked with.” The passing of the Matrimonial Causes (Divorce) Act of 1857 didn’t make it much easier for women to extricate themselves from a violent husband (he would also have to commit adultery), but the establishment of the Divorce Court did expose abusive marriages to public scrutiny, exploding the myth that wife-beating was confined to the hoi polloi. Queen Victoria complained that it was no longer safe for a family to read the newspaper at the breakfast table, such was the lurid nature of many reports.
Given this impressive book spans more than 500 years, the reader occasionally craves more detail on a particular topic. However, Waller achieves a magisterial sweep through the history of marriage, deftly illustrating its landmarks with seminal cases and the often heart-breaking stories of those who laboured under the considerable weight of an indissoluble union. Waller handles her material with great sensitivity, never forgetting the pain that underlies the sensational headlines. Overall, she argues, access to divorce is vital if the institution of marriage is to survive.
This roll-call of unhappiness notwithstanding, lovers are not shunning matrimony. Despite his earlier cynicism, Rod Stewart is now married for the third time. As Waller concludes: “Love triumphs and hope springs eternal.”

The English Marriage: Tales of Love, Money and Adultery by Maureen Waller is available in both paperback and Kindle editions.