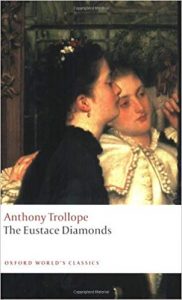 My Trollope season continues with The Eustace Diamonds (1873), the third in the series of Palliser novels, and my least favourite thus far.  The young and beautiful Lizzie Greystock traps the elderly and very wealthy Sir Florian Eustace into marriage, and within a year she is a widow in possession of a necklace worth £10,000 (around half a million quid): the Eustace diamonds.  Although she is adamant that the jewels were a gift from her late husband, the Eustace family lawyer insists they were an heirloom and therefore not hers to keep.  He embarks upon a quest to retrieve them from the clutches of the recalcitrant Lady Eustace, who boldly repels the intrusions of detectives and decamps to Scotland in order to protect her assets.

She cunningly contrives a fake robbery during which the diamonds appear to have been stolen, but are safely stashed in her strongbox.  Although her supposed loss initially attracts sympathy, her enemies start to suspect her complicity.  When the necklace is stolen for real by Lady Eustace’s maid, the memorably-named Patience Crabstick, she discovers that diamonds aren’t a girl’s best friend after all and that she doesn’t have any others.  Lady Eustace has by now lost her reputation and much of her fortune and must settle for marriage with an odious clergyman.  Her attempts to net a more attractive husband fail when her various suitors discover that her beauty is entirely specious and that her tangle with the law has rendered her a social pariah.

I was really rather disappointed in Trollope’s portrayal of Lizzie/Lady Eustace.  There is a strong Victorian tradition of shameless yet engaging villainesses, such as Lydia Gwilt and Becky Sharp, but Trollope’s creation lacks their appeal.  His narrator spends far too much time telling us that she is thoroughly wicked, rather than giving her an opportunity to demonstrate it through her misdeeds.  I actually ended up feeling quite sorry for her, despite her pathological inability to tell the truth, as to her the diamonds are simply a trinket to which she believed herself entitled.  She is essentially hunted down by the male characters, who are primarily concerned with maintaining the system of inherited wealth on which their families are based.  Lizzie is also contrasted with the ineffably dull but good  Lucy Morris, a governess who is little more than a cypher.  Lady Glencora Palliser and Alice Vavasor were far more successful female creations in the two previous novels, and former makes only a very brief cameo appearance in this novel.

Overall, the novel relies too much on description and ponderous dialogue, and not enough on narrative drive.  Trollope has clearly borrowed a few plot devices from Wilkie Collins’ The Moonstone, but eschews its dramatic tension.  Trollope believed that the reader should focus on character, rather than plot, commenting through his narrator that he “scorns to keep from his reader any secret that is known to himself.”  This technique works well in the other novels, but seems to lose its way in The Eustace Diamonds.  I believe Lady Eustace resurfaces in the next Palliser novel, Phineas Redux, so I am looking forward to discovering her fate, although hoping that she will be playing a minor role next time.