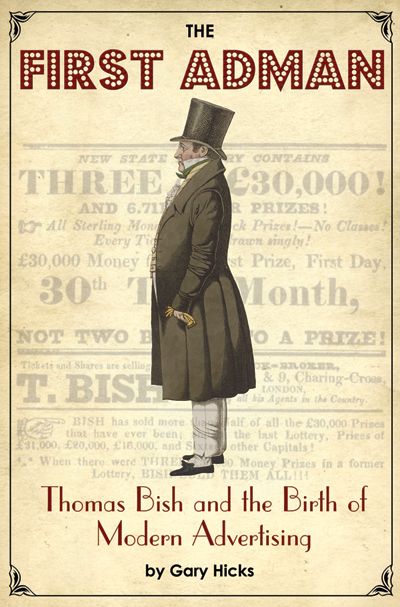 As someone who doesn’t really have her finger on the pulse of the 21st century, I’ve only just caught up with the TV series Mad Men, which appears to be all the rage. The hero is Don Draper, a rather shadowy and shady advertising executive with a knack for creating brands. Although he is supposedly based on some real-life admen from the 1960s, he actually has a much early antecedent in the form of Thomas Bish.

Virtually unknown today, at the beginning of the nineteenth century Thomas Bish (1779-1842) was reputedly more famous than the prime minister himself. As an entrepreneur and accomplished self-publicist, he was courted by royalty, politicians and other people of note. Most of Bish’s creative talents were channelled into promoting the old state lottery, which raised the equivalent of £2 billion for good causes and also made him a very wealthy man. Hiring the essayist Charles Lamb as a copywriter and George Cruikshank to illustrate his advertisements, Bish professionalised ad campaigns. The techniques he pioneered include spin doctoring, graphic design, modern typography, direct marketing, and even early market research.

The state lottery was a precarious business, and entirely at the whim of the government. It was also open to abuse, and Bish was obliged to repeatedly dodge charges of corruption and fraud. Mindful that his luck might run out, in 1821 he set about reviving the fortunes of the Vauxhall Pleasure Gardens, a slightly seedy venue favoured by George IV and his cronies. Bish’s rebranding and relaunch was an enormous success, with crowds flocking to enjoy the entertainment. Among the professionals he hired was the extraordinary Madame Hengler, a tightrope walker and impresario who died in spectacular fashion when the store of fireworks she kept at home suddenly went off one night. She is immortalised in Thomas Hood’s ode as “Starry Enchantress of the Surrey Garden!”

Like many rich and successful men, Bish soon turned his attentions to politics. Notwithstanding the great advances of the 1832 Reform Act, politics remained a murky business: parliamentary seats were won through money and influence, with the barest nod towards democracy. A long campaign of dirty tricks eventually bagged Leominster for Bish, a remote Herefordshire constituency that had abolished the ducking stool only in 1809. While the means certainly weren’t dignified, they were justified by the end, as Bish was hailed as one of the most hard-working and honourable MPs. He campaigned vigorously to ban capital punishment and slavery, and also to repeal the corn laws, making him one of the few genuinely radical politicians of the period.

Most significantly, Bish was a staunch defender of Ireland, lobbying tirelessly for Westminster to intervene and avert the impending famine. His pamphlet A Plea for Ireland argued persuasively that the Irish parliament should again be held at Dublin, thereby giving the area a much needed economic boost. Bish also promoted Ireland as a tourist destination, realising that its unique beauty was a strong selling point. Although his stance won him the friendship of Daniel O’Connell, his Westminster colleagues remained inert. It was possibly frustration that prompted Bish to give up politics in 1837, and he instead devoted his energies to the exhilarating sport of hot-air ballooning. His success was mixed, and one of the first duties of the newly-crowned Queen Victoria was to award a pension to the wife of Robert Cocking, who became Britain’s first aerial fatality.

After his death in 1842, Bish disappeared almost without a trace – remarkable for a man so adept at self-promotion. However, his legacy remains in many of the advertising techniques we think of as “modern”, and in the seemingly inexplicable excitement generated by the National Lottery. While Bish was certainly a flawed and often ruthless character, his genuine concern for Ireland and determination to abolish slavery make him also a very endearing one.

The First Adman: Thomas Bish and the Birth of Modern Advertising is available in paperback and Kindle editions.