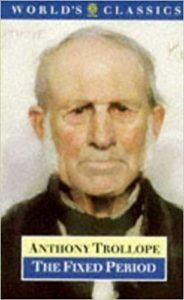 The futuristic utopia depicted in The Fixed Period (1882) is a radical and unexpected departure for Anthony Trollope.  Imagine Thomas Pynchon writing a chick lit novel, or Maeve Binchy turning her hand to slash fiction.  It’s a radical departure for me, too, as essentially I’ve been tricked into reading science fiction.  The story is set in 1980 in the fictional republic of Britannula, created when a group of ex-pats occupy the South Island of New Zealand and claim independence from Great Britain.  The 25,000-strong community is led by President John Neverbend, who almost bursts with his own self-importance and civic pride.

The tiny nation is initially peaceful and well-ordered, serving as a model democracy.  However, disharmony prevails when President Neverbend introduces his pet theory of the Fixed Period.  Concerned that people should not be allowed to outlive their usefulness, he introduces a programme of mandatory euthanasia for anyone reaching the age of 67 and a half.  His fellow legislators initially agree with the plan, although with an attendant degree of unease.  The trouble comes when the first man to be “deposited”, Gabriel Caswaller, mounts a spirited defence, and his popularity in the community means that he is also able to rouse popular support.  Neverbend is appalled that his carefully-planned scheme could fall at the first hurdle, and is completely intransigent.  His difficulties are compounded by the fact that is own son has fallen in love with Caswaller’s daughter.  Nevertheless, he perseveres with his extraordinary policy and is stopped only by a dramatic deus ex machina.

The Fixed Period is darkly comedic and one of Trollope’s most entertaining novels.  He clearly enjoyed himself enormously coming up with inventions for the 1980s and imagining what life would be like.  Although he doesn’t quite predict the ZX81 or Bananarama, he does suggest mobile telephony and a form of podcasting.  The Britain from which Britannula has seceded is essentially the same, however, with a strong hereditary principle in politics and Gladstone’s great-grandson as Prime Minister.  The character of President Neverbend is a fine creation, as is his wife, Sarah, who pricks his pomposity with Mrs Caudle-style lectures.

Contemporary reviewers weren’t quite sure what to make of The Fixed Period, and the Times described it as “essentially ghastly”.  It’s difficult to know whether Trollope seriously supported the idea of euthanasia, voluntary or otherwise.  In a curious twist of fate, however, he died not long after the novel was published, at the age of 67 and a half.