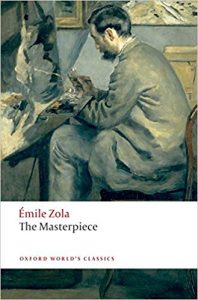 Oh dear.  I’ve just seen an Amazon reviewer complaining that Zola’s The Masterpiece is “too depressing”.  Just what would he expect from a realist writer who focused on the poor in 19th century Paris?  It’s the most autobiographical novel of his Rougon Macquart series and provides a fascinating insight into the life of the artist, whether their medium be paint or the written word.  His expose of the snobbish reaction to the work of the Impressionists is almost painful to read, and Zola’s friend Cezanne never to spoke to him again after receiving a complimentary copy.  Mrs Zola, however, thought it her favourite novel.  I suspect it was more important to keep her sweet.

Claude Lantier, the anti-hero, throws his life and soul into his painting to the detriment of his family, and his wife Christine comes to resent his work.  As part of the “Open Air’ (read ‘Impressionist’) school, his efforts are met with derision and he fails to achieve commercial success.  He is contrasted with his friend Sandoz who manages to earn a decent living by writing books that people want to read, whilst still managing to convey some of his own ideas.  This is quite obviously Zola himself, and he seems to suggest that it’s all very well being seized by the creative muse, but you still have other responsibilities to consider.  Christine represents the claims of life over art and challenges his devotion to such a fruitless exercise.  They are both ultimately disappointed.  Yes, it’s depressing, but there’s always Bunty if you want a happy ending.

The Masterpiece by Emile Zola