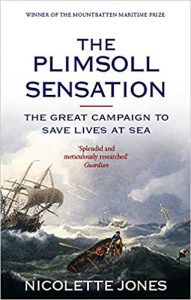 Samuel Plimsoll MP (1824-1898) is a peripheral character in Victorian history, but his contribution to politics was immense.  His Big Idea was to mark a line on the side of a ship to indicate the lowest level at which it might safely sit in the water.  Although that might sound like plain common sense, opposition to Plimsoll’s proposal was colossal.  Some ruthless shipowners would deliberately over-insure their vessels and send them to sea in a terrible state of repair.  If the ship sank, they would receive several times its value, but the crew would meet with a salty death.  Although such extreme cases were mercifully rare, it was relatively common practice for businessmen to seriously overload their vessels in a bid to maximise profits.  Understandably, sailors were reluctant to crew these “coffin-ships”, but refusal meant three months’ imprisonment – the law protected the criminal, rather than the victim.

Plimsoll was effectively a whistle-blower.  His campaign took 20 years, during which he was pitted against many of his Parliamentary colleagues with vested interests, who were keen to maintain the status quo.  Like a Victorian Joanna Lumley, he whipped up national feeling, thereby shaming the cowardly Government into action.  Opponents cried that profits would be affected, thereby causing job losses (the same tired arguments that were used more recently against the introduction of the minimum wage).  Those who were expected to risk their lives had no voice at all, thanks to the limited franchise.  As one account put it: “The appearance of a seaman in a court of law was as rare as giraffes in drawing rooms.”  Life on the high seas was hard enough without an increased risk of death.  One of the many illuminating anecdotes in the book is that of the weevil-infested ship’s biscuit scampering around the decks of its own accord.  Plimsoll took it upon himself to speak for the underrepresented (and undernourished).

Samuel Plimsoll’s vocation was clear from an early age.  When Oliver Twist was published in 1837, the 13-year-old Samuel was inspired to write a pamphlet entitled A Plan to Have Fatherless and Motherless Children Cared for Instead of Being Consigned to the Workhouse.  This was the beginning of a long career that was to be devoted to standing up for the poor and oppressed.  He initially made a name for himself by supporting the widows and orphans of miners killed in explosions. His indefatigable fund-raising efforts kept many families from the workhouse. Plimsoll was an instinctive campaigner and one who could quickly grasp an issue of importance.  His 1863 paper Is it desirable to consolidate the existing railways of the United Kingdom into one system under government control? has a certain timeless quality.  The chaos caused by a plethora of profit-hungry rail operators is apparently a perennial problem.  He also spoke out against police brutality, and in particular the heavy-handed actions of those charged with controlling public protests.  Later in life, he turned his attentions to the appalling conditions endured by transported livestock, proposing a simple solution (which was ignored).

He wasn’t just a mouthpiece for the causes he espoused, however – he attended protests and was known to leap from his bed when alerted that a coffin-ship was about to set sail.  He direct action in these cases potentially saved hundreds of lives and won him many fans.  It also won him many enemies, who were keen to silence this impertinent man, and did not care for the way in which he was reducing their profits and exposing their villainy to public scrutiny.  Plimsoll became a regular defendant in libel cases and the high costs caused him to lose his house.  Undaunted, he and his wife continued to tour the country, rallying support and raising awareness. His cause was finally vindicated by the passing of the Merchant Shipping Act on 12 August 1876.  For the first time, it was illegal to knowingly send sailors to their deaths, and loading levels were to be marked on the outside of ships with the famous symbol – a circle with a line through the middle – that became popularly known as the Plimsoll Line.  The symbol is even more well-known these days as the London Underground sign.

As one might expect, Plimsoll found it impossible to retire quietly from political life after having achieved his ambition.  Although a devout Christian himself, he was appalled when Charles Bradlaugh’s atheism led to his being prevented from taking his seat in the House of Commons.  Plimsoll saw this action as another example of Parliament’s “spirit of domination and intolerance”.  As Nicolette Jones writes: “Bradlaugh found it easier to secure a place in Madame Tussauds, which admitted him in July 1880, than to be allowed to take the seat his electorate repeatedly voted him into, which did not happen until 1886.”  How odd that Parliament should be out of step with public opinion.

The sincerity of Plimsoll’s beliefs was epitomised by the manner in which he buried his beloved wife, who died ten years after their great achievement.  Although he paid for a private burial plot at Highgate Cemetery, he insisted that the family vault be placed amongst the poor.  This bereavement was a blow from which it took him a few years to recover, but he eventually regained some of his former momentum, this time proposing prison sentences for rich men who raped poor women, referring to them as “crawling creatures”.

Such radical stances resulted in an equivocal response to news of Plimsoll’s death in 1898.  His involvement in controversial campaigns had earned him a reputation as a trouble maker, and the common sense nature of his proposals gave them an air of inevitability which detracted from his considerable achievements.  His method was encapsulated by another national treasure, Tony Benn, almost 100 years later:

We like to think that [social progress] is made by an amendment from a Back Bencher, and accepted by the Government.  It is not like that at all.  Social progress is made when public pressure builds up…My experience is that when people come along with some good idea, in the beginning it is completely ignored: nobody mentions it at all.  If people go on, they are mad, and if the continue, they are very dangerous.  After that, there is a pause and then nobody can be found who does not claim to have thought of it in the first place.  That is how social progress is made.

Nicolette Jones’ biography is another welcome tribute to Plimsoll’s life and career.  She has produced a meticulously-researched and highly readable account which is carefully placed within its historical context, along with a wealth of informative (but not excessive) detail.   The book is an excellent example of how skilled biographers can bring our attention to once-prominent figures who have been unjustly forgotten.  We need a few Samuel Plimsolls today to stand up for those who are crushed by the relentless pursuit of profit.

The Plimsoll Sensation: The Great Campaign to Save Lives at Sea by Nicolette Bell