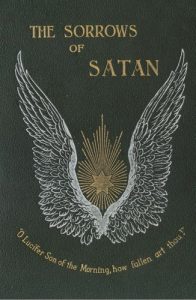 Marie Corelli’s The Sorrows of Satan (1895) is possibly the oddest novel I’ve ever read.  And that’s saying something.  The plot concerns Geoffrey Tempest, a struggling novelist, who unexpectedly inherits £5 million from a distant relative.  This stroke of good fortune coincides with a visit from Prince Lucio Raminez, who the reader soon realises is the eponymous Satan.  Tempest unwittingly makes a Faustian pact, and the life of which he could once only dream finally becomes a reality.  He marries a much-celebrated society beauty, Lady Sybil Elton, and is able to buy them an idyllic home in the countryside.  His new-found wealth also brings fame, thus ensuring an eager market for his novel.

All is not rosy, however.  Lady Sybil has been corrupted by reading New Woman novels, and she wantonly offers here body to Raminez (aka Satan).  Although he rebuffs her, their confrontation is overheard by an appalled Tempest.  He insists on an immediate separation, and the ruined Sybil poisons herself.  Tempest eventually realises that his “success” has come at a high price.  His wife’s beauty is entirely specious, and his novel is a bestseller purely because of his notorious wealth.  He can’t help but compare his wife with his neighbour, the saintly Mavis Clare, who writes wholesome Christian stories.  He had once written an excoriating review of one of her novels, but is overcome with contrition when he meets her.  She is a tiny angelic figure who exudes goodness and suffers undeserved abuse at the hands of critics.  Only she is able to uncover the true identity of Raminez, and thus the destruction of Western civilisation is narrowly averted by a diminutive authoress. In an exciting denouement on Raminez’s yacht Flame, Tempest renounces suicide and with it his fortune.  On his return to shore, he discovers that his millions have been embezzled by the accountants.  He is forced to resume the humble existence of an impecunious writer, but is inspired by the fine example of Mavis Clare.

John Sutherland refers to The Sorrows of Satan as Corelli’s “most extravagantly narcissistic romance”, and it’s easy to see why.  Mavis Clare is a thinly disguised portrait of the author herself, and she uses the novel to attack her many perceived enemies.  Although Corelli vehemently denied that Mavis Clare was a self-portrait, they shared the initials which were the trademark gold monogram on her book covers.  Like Mavis, Corelli was poorly received by critics, although her phenomenal book sales proved her perennial popularity.  Reviewers of such organs as the Athenaeum are denounced as failed novelists who have no idea whereof they write.  She also rails against her fellow novelists, most of whom she sees as morally corrupt.  Although she is careful not to use specific examples, her charge that “polygamous purity is the ‘new’ creed” is likely to refer to Tess of the D’Urbervilles, with its subtitle ‘A Pure Woman Faithfully Presented’.  Corelli liked novels to be morally unambiguous.  Mavis disapproves of the circulating libraries, and Lady Sybil’s one redeeming feature is that she buys books, rather than borrowing them.  Although the objection Mavis voices to library books is that they spread infection, Corelli was mainly concerned that the money should end up in her pocket, rather than Mr Mudie’s.  She also stipulated that no review copies of her novels should be sent out, safe in the knowledge that the periodicals would buy them regardless and thus add to her already considerable coffers.

Mavis Clare is the most curious literary creation, and indeed the first ever Mavis.  The name means “song thrush” and had never before been used.  Geoffrey Tempest, as narrator, declares: “at rare intervals God makes a woman of genius with a thinker’s brain and an angel’s soul”.  He also in a moment of despair sees “an angel floating towards me on pinions of light, with the face of Mavis Clare”.  Elizabeth Taylor’s Angel was based on the life of Corelli, and I can only imagine this novel was part of the inspiration.  She sets herself up as a paragon of virtue and an antidote to the poison of New Woman novelists: “the self-degrading creatures who delineate their fictional heroines as wallowing in unchastity, and who write freely on subjects which men would hesitate to name, and unnatural hybrids of no-sex.”  She voices contemporary fears of fin-de-siecle degeneration, believing there will be a “new sex which will be neither male nor female” and lambasting the “tomboy tennis-players and giantesses of the era”.  Lady Sybil confesses that her failure to adapt to marriage and inability to feel has been caused by all the novels pointing out the inadequacies of such unions.  The consequences of the ensuing apathy are Armageddon.  Raminez reveals that “the world is a veritable husk of a planet; humanity has nearly completed all its allotted phases, and the end is near.”  I suspect Corelli thought the end came in 1924, when she laid down her pen for the last time.