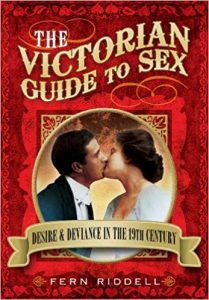 Although Queen Victoria was supposedly prudish, she popped out nine tiny Saxe-Coburgs and the population more than doubled during her reign. We might think of the Victorians as sexually repressed, but they were clearly at it like stoats. In The Victorian Guide to Sex, Fern Riddell synthesises a wealth of material from marriage guides, newspapers, and the archives to bring us a more sophisticated and composite view of our ancestors.

Unusually, the material is presented through fictional characters, members of The Society of Social Morality, who seek to further human social understanding. Dr Dimmock takes us on a tour of the human body, acknowledging the ghastliness of puberty and issuing a stern warning on the dangers of celibacy. Eschewing the pleasures of the flesh led to blindness, deafness, and “many various foul diseases of the skin”. No wonder monks are always mad in Victorian novels. Dimmock’s message is clear: “Choose Love, Choose Life”. It’s that simple. Of course, one shouldn’t choose a partner indiscriminately. Large-footed men and women are awkward yet reliable, but small-footed persons are “dangerously prone to gaiety and evolutions across the ballroom”.

The modern world, says Mrs Dollymop, is “a befuddling place to navigate”. Fortunately, she is brimming with advice on hair, make-up, and choosing a husband. She advises playing a long game, as “husbands cannot be returned once you have got them home and discovered their flaws” (although if you take counsel instead from Lady Audley, they can be pushed down a well). While Mrs Dollymop apparently suggests a rather limited sphere for women, she takes time out to celebrate the achievements of nineteenth-century rebels such as Annie Besant, Ada Lovelace, and Cora Pearl.

Preserving masculinity is the concern of the Rev. J J James, who urges young men to follow the example of strongman Eugen Sandow, deemed to embody physical perfection. James helpfully includes a guide for flirting: winking the right eye announces “I love you,” while placing the right little finger to the right eye means “Aren’t you ashamed?” It’s a minefield. One should be particularly wary of nervous tics in the presence of women with heavy legs and flat shoes – signifiers of a coarse nature: “Avoid this as you would the pox,” he advises.

Lady Petronella Von Hathsburg brings a certain worldliness to her chapter, eager to ensure marital felicity for both husband and wife. The mysteries of the marriage bed are unveiled and the importance of the female orgasm is stressed. For the woman, “this will arrive as a tinkling pleasure … which she must advertise to her husband immediately”. To ensure that conception occurs, the woman must avoid a “downward situation” by not talking, sneezing, or coughing.

Among Mr Mandrake’s Compendium of Practical Aids is a cure for hysterical behaviour: lay the victim on a waterproof sheet and douse them with a jug of cold water. I might try this on the next UKIP candidate who knocks on the door. While most of the other remedies are quaintly obsolete, a “decent glass of hot gin-and-water at bedtime” certainly sounds like a solution to most ailments. Some of Mr Mandrake’s practical aids are of a more, errrm, manual nature. The Vee Dee Vibrator, which looks for all the world like a giant rotary whisk, was designed to cure muscular pain and debilitating nervous diseases. Well, it would surely take your mind off them. Princess Alexandra was, apparently, an enthusiastic user of Vigor’s Horse-Action Saddle, an odd contraption that was supposed to stimulate the liver (among other things). Filthy cow.

Thanks to his correspondence with ‘Walter’, author of My Secret Life, Lord Arthur Cleveland is able to advise us on “extreme tastes,” such as homosexuality, prostitution, and flagellation. Having attended boarding school, Lord Arthur is under no illusions regarding the sexual nature of men, evidenced in the popular playground game of ‘Cocks-all-around’, where the little savages would compare their lower portions.

While much of this material is authentic, Riddell readily admits (albeit reluctantly) that ‘The Femme de Voyage or Artificial Fanny’ might have been a spoof, with no existence beyond the privately circulated magazine in which it appeared. This inflatable device was perfect for travellers, but only those who could afford the equivalent of £12,000. That would pay for an awful lot of prostitutes, but then I suppose they’re more difficult to conceal in your hat.
The Victorian Guide to Sex is part sourcebook, part pastiche, so is difficult to categorise as a book. Although the sources are listed at the back, the lack of footnotes means it’s unsuitable for academic study. What it does provide, however, is an enjoyable read and an informative survey of Victorian sexual tastes and preoccupations. Riddell knows her stuff and succeeds in presenting a rigorously balanced account of this complex subject. From her absorbing book, the Victorian era emerges as no less surprising or contradictory than our own.

The Victorian Guide to Sex: Desire and Deviance in the 19th Century by Fern Riddell is available in paperback.