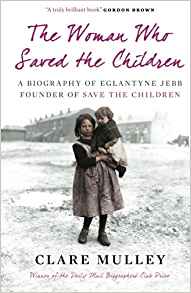 It is one of life’s delicious ironies that the founder of Save the Children, Eglantyne Jebb, referred to infants as “little wretches”. She went on to say that “the Dreadful Idea of closer acquaintance never entered my head”. Notwithstanding this aversion to the actual artefact, Jebb saved the lives of millions of children through her indefatigable efforts, raising awareness that the younger generation comprised an important national asset that should be protected and nurtured.

By rummaging through letters, diaries, journals and press-clippings, Clare Mulley presents a rich profile of her subject, deftly handling Jebb’s inherent contradictions and sometimes unlikeable characteristics. This is a very personal biography, with Mulley providing insights into the biographer’s relationship with their subject, and how this is prone to challenges and frustrations.

Eglantyne Jebb was born in 1876, one of five boisterous siblings in an intellectual and prosperous Shropshire household. The potentially deleterious effects of a Conservative father were counteracted by the presence of Aunt Bun, an ardent Liberal and advocate of women’s rights. Unsurprisingly, Mr Jebb was not keen on the idea of young Eglantyne going to university, believing it would turn her into an unmarriageable bluestocking. Supported by her Aunt, herself a Newnham graduate, Eglantyne got her way, anticipating the determination that was to characterise her later achievements.

As Mulley writes, “Only two years before Eglantyne arrived at Lady Margaret Hall women had to be chaperoned to lectures and could not join a university society, or cycle on Sundays. They could still not cross a college quad alone and had to be in by ten at night unless granted special leave.” In such a circumscribed environment, this indomitable and striking character caused a stir among the other female undergraduates. One described her as “dressed in green, with golden-red curly hair and a complexion seldom found outside a novel.”

After pushing the boundaries of acceptable behaviour for Oxford gels, Eglantyne left university with a second-class degree and trained to be a teacher, one of the few career opportunities open to women at the time. Her snobbery and lack of worldliness are exposed when she comments disdainfully that her fellow trainees “wear aprons and have accents”. Although disillusioned with her initial foray into pedagogy, Eglantyne persevered, taking a post at a school for working-class girls. This proximity to children gave her little pleasure, and the strain of unwilling labour caused a breakdown and a swift exit from her nascent profession.

A move to Cambridge provided refreshment – both a change of scene and a welcome release from the lower orders. Although old-fashioned in so many ways, early-twentieth-century Cambridge offered many opportunities for the intellectually curious, and Eglantyne soon involved herself with the Charities Organisation Society, going on to write an important social survey of her new city. As Mulley observes, “For Eglantyne, poverty was neither a result of natural law or providence, nor purely a government policy issue, but a collective social responsibility that could only be addressed through the promotion of active citizenship across all social classes and generations.” Jebb’s perspicacity on local issues became part of her much grander vision.

It was at the Charities Organisation Society that Jebb met Margaret Keynes, sister to the famous economist. Eglantyne found herself drawn to this “exceedingly pretty and winsome” young woman, who shared her passion for social issues. Their opposite personalities were complementary: Eglantyne confident, yet physically frail; Margaret nervous, but unflagging in her desire to serve her new mentor. Although it is clear from letters and journals that Margaret and Eglantyne enjoyed a physical relationship, they were living at a time when lesbianism was not recognised or acknowledged. Intense female friendships were common, many of which would now be interpreted as sexual. Mulley handles the issue with admirable sensitivity, avoiding a retrospective categorisation, but at the same time acknowledging the importance of their relationship. Margaret and Eglantyne discussed their “marriage” and the possibility of buying a house together. Their plans were fully supported by Eglantyne’s mother, who wanted her daughter to be happy.

Eglantyne was indeed happy, at least until Margaret forsook her for a professor of frog anatomy. Edging towards twenty-eight, Margaret realised that a conventional marriage would provide her with children, financial security and also social acceptability. Although Eglantyne was dignified in rejection, her pain was overwhelming, no doubt compounded by Margaret’s insensitivity in expecting her approval. While Margaret embraced her new and conventional life, Eglantyne was left lonely and grieving. She confided to her diary: “I miss Margaret more and more … I miss her and I miss her, however things happen and wherever I am. This great affection of mine seems to shatter me and yet I do not believe it is wrong to feel it.”

Characteristically, Eglantyne threw herself into work as a distraction from heartache, producing a report on the humanitarian crisis in the Balkans. Her experiences led her to conclude: “It is in war itself, not in its victims, that the barbarity lies.” The horror of conflict displaced Eglantyne’s patriotism, leaving her with a passionate antipathy towards all war. She was particularly moved by the consequences for the innocent, making the irrefragable statement, “Surely it is impossible for us, as normal human beings, to watch children starve to death without making an effort to save them.” That’s exactly what she set out to do.

While many would have agreed with Eglantyne’s sentiments, she actually acted on her beliefs, establishing Save the Children with her sister Dorothy Buxton in 1919. Although the initial aim was to alleviate starving children in the aftermath of the Allied Blockade, the charity’s scope became international, helping to save millions of young lives. By the end of the following year, Eglantyne had raised the equivalent of £8m, boosted by an endorsement from Pope Benedict XV (a rare, if not unique, example of papal intervention actually helping matters). Other prominent figures also lent support, including George Bernard Shaw, who contributed the laconic but poignant statement: “I have no enemies under the age of seven”.

Eglantyne’s achievements were remarkable, especially given her persistent ill health. She suffered from heart problems, depression and vacillating energy levels, often resulting in extreme exhaustion. Now recognised as symptoms of an overactive thyroid, there was little understanding of the condition at the time. Eglantyne wrote, “In idleness it seems impossible to be happy,” the benefits of rest entirely counteracted by the stress of being rendered inactive. These periods also gave her time to reflect on the loss of Margaret, and she struggled with the “wish to escape from the personal pain of living”.  Her sheer force of will kept Eglantyne going, and she often worked from her sickbed. Eventually, however, her body was worn down and she succumbed to a stroke at the age of just fifty-two.

Her time on earth was relatively short, but Eglantyne Jebb achieved a great deal with her allotted span, saving children, redefining child welfare and writing influential social policy, all in an era when women were excluded from political life. Her legacy is particularly impressive for someone who didn’t even like children. As Mulley notes, “Eglantyne chose the universal over the particular. Her focus was not a personal, embodied child, but an unknown, universal, symbolic child, that represented social potential.” While Save the Children is one of the world’s best-known charitable organisations, Eglantyne herself remains an obscure figure, and she has not received the recognition she deserves. Mind you, Princess Anne named one of her bull terriers Eglantyne, which is perhaps the epitome of a backhanded compliment.

Mulley makes a compelling case for Eglantyne Jebb’s resurrection as an important figure. Although impressed by her subject’s achievements, Mulley never recoils from presenting the less attractive qualities, such as her snobbishness and intellectual aloofness. Eglantyne’s complex and contradictory nature is presented in an engaging narrative, embodying a perfect balance between historical context, character, and readability. Jebb was serious about her work, but never took herself too seriously, and her sense of fun permeates a book punctuated with much sadness. This unlikely children’s champion has been given overdue acknowledgement by a talented, sympathetic and insightful biographer.

The Woman Who Saved the Children: A Biography of Eglantyne Jebb by Clare Mulley is available in paperback and Kindle editions. All royalties are donated to Save the Children, so you can read a wonderful book and also help a good cause at the same time.