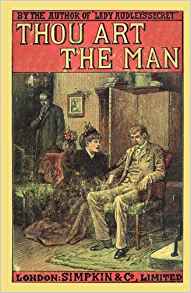 Having long been a firm advocate of Lady Audley’s Secret and defended it against charges of anti-feminism, I am delighted to discover that Mary Elizabeth Braddon has reworked some of its themes in her later novel, Thou Art the Man.  Originally published in 1894, this work takes account of the prevailing discourses on heredity, degeneration and madness.  This time, however, it is the male characters who are shown to be degenerate, and the female heroines turn detective in order to unmask the villain.

Sybil Higginson, a young heiress, is distraught when her cousin and lover, Brandon Mountford, is accused of a brutal murder.  His epilepsy, which causes seizures and memory loss, means he is unable to defend himself with a suitable alibi.  He escapes from prison and is thought to have perished in a shipwreck.  Years later, Sybil, now Lady Penrith, receives a mysterious note indicating he is still alive.  She decides to uncover the truth, with the help of her cigarette-smoking, horse-riding niece, Coralie Urquart.

Although the plot is a traditional Victorian pot-boiler, the way in which Braddon examines the idea of madness makes it particularly interesting.  A number of perspectives are presented, from those who believe that epileptics are dangerous monsters, to others who think it is an illness that should be treated like any other.  The idea of criminal responsibility is also explored, so Braddon must have taken an interest in the nascent science of criminology.  Although such themes are given sensationalist treatment, it is never at the expense of characterisation.  Braddon manages to both build suspense and present complex villains, such as the solipsistic vicar, and Coralie’s grasping and cynical father.  Unlike the baddies in some of the works by earlier sensation novelists, they are depicted as weak men, rather than Vaudeville villains.  Coralie herself is an intriguing, although not entirely flattering, portrait of a New Woman.  Although this character does slightly undermine Braddon’s proto-feminist credentials, the fact that Sybil Higginson triumphs (I shan’t say more than that) over her weak male counterparts shows that the author was keen to avenge Lady Audley’s defeat.

The novel is complemented by a insightful introduction by Laurence Talariach-Vielmas, and the edition is of the usual high standard we’ve come to expect from the inestimable Valancourt Books.