The Three Men are back, and this time they’re on wheels. Follow the comic capers of J, George, and Harris as they embark upon a bicycle tour through Germany’s Black Forest.

Prepare yourself for cultural stereotypes, disobedient beetles, and many mishaps along the way.

This edition includes an introduction by Jerome’s biographer, Carolyn W. de la L. Oulton, and all the original illustrations.

Victorian Secrets also publishes Three Men in a Boat, Weeds: A Story in Seven Chapters, and Below the Fairy City: A Life of Jerome K. Jerome.

“I also think pronunciation of a foreign tongue could be better taught than by demanding from the pupil those internal acrobatic feats that are generally impossible and always useless. This is the sort of instruction one receives: ‘Press your tonsils against the underside of your larynx. Then with the convex part of the septum curved upwards so as almost but not quite to touch the uvula try with the tip of your tongue to reach your thyroid. Take a deep breath and compress your glottis. Now without opening your lips say “Garoo”.’ And when you have done it they are not satisfied.”

“If a man stopped me in the street and demanded of me my watch, I should refuse to give it to him. If he threatened to take it by force, I feel I should, though not a fighting man, do my best to protect it. If, on the other hand, he should assert his intention of trying to obtain it by means of an action in any court of law, I should take it out of my pocket and hand it to him, and think I had got off cheaply.”

“English spelling would seem to have been designed chiefly as a disguise to pronunciation.”

“I began to wonder whether he had lost his mother when young, and had been brought up by a cat.” 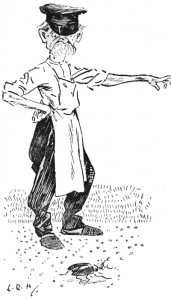 “In Germany, they put a notice-board in the middle of the place, ‘Hunden verboten,’ and a dog that has German blood in its veins looks at that notice-board and walks away. In a German park I have seen a gardener step gingerly on to a grass-plot, and removing therefrom a beetle, place it gravely but firmly on the gravel; which done, he stood sternly watching the beetle, to see that it did not try to get back on the grass; and the beetle, looking utterly ashamed of itself, walked hurriedly down the gutter, and turned up the path marked ‘Ausgang’.”

“A ‘Bummel’, I explained, I should describe as a journey, long or short, without an end; the only thing regulating it being the necessity of getting back within a given time to the point from which one started. Sometimes it is through busy streets, and sometimes through the fields and lanes; sometimes we can be spared for a few hours, and sometimes for a few days. But long or short, but here or there, our thoughts are ever on the running of the sand. We nod and smile to many as we pass; with some we stop and talk awhile; and with a few we walk a little way. We have been much interested, and often a little tired. But on the whole we have had a pleasant time, and are sorry when ’tis over.”