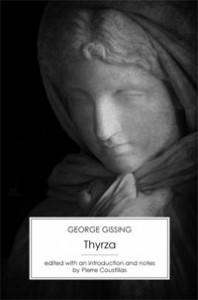 First published in 1887, Gissing intended Thyrza to “contain the very spirit of London working-class life”. He spent long hours researching the novel in south London, watching and listening to the inhabitants as they went about their business.  His story tells of Walter Egremont, an Oxford-trained idealist who gives lectures on literature to workers, some of them from his father’s Lambeth factory. Thyrza Trent, a young hat-trimmer, meets and falls in love with him, forsaking Gilbert Grail, an intelligent working man who Egremont has put in charge of his library.

Thyrza is one of Gissing’s most memorable characters. Although blessed with an artistic sensibility, she is faced with the insuperable difficulty of rising beyond her social class, a trick Gissing himself had achieved. Her determination to succeed makes her vulnerable to the charms of Egremont, who vacillates between her and the middle-class Annabel Newthorpe. As is often the case with Gissing, ambition leads to betrayal and disillusionment and the ending is far from happy.

Thyrza is the embodiment of Gissing’s preoccupation with sex, class, and money, and through her he exposes a society intrinsically opposed to social mobility. The juxtaposition of rich and poor is illustrated in the accompanying maps, specially drawn by the folks in the Geography Department of UCL.

This isn’t a particularly uplifting read, but it’s perhaps Gissing’s greatest artistic achievement, and also his most sympathetic portrait of London’s poor. In a letter, Gissing wrote, “Thyrza herself is one of the most beautiful dreams I ever had or shall have. I value the book really more than anything I have yet done.” Contemporary critics praised Gissing’s “profound…knowledge of the London poor” and his “courageous presentation of truth”.  This “truth” included describing the “meanness and inveterate grime” of the Caledonian Road and a Lambeth “redolent with oleaginous matter”. Perhaps it’s one to save for a sunny day.