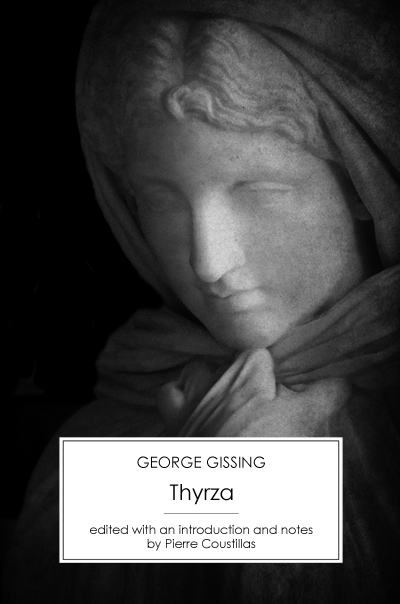 Gissing always kept an affectionate memory of this book and of Thyrza herself. I have heard it said that the story was written before Demos. This is assuredly not the fact. It followed hard upon Demos, and it was undoubtedly the modest success of his Labour novel which made him capable of drawing, when in comparative peace, this beautiful portrait of an idealised working-girl. The undiluted pessimism of Isabel Clarendon, which shows so plainly its Russian affinities and his own temperament, equally plainly akin to many of the Russian writers from Turgeniev onward, seems to have left him for the time. Sad as Thyrza is, its sadness has in it little bitterness. When I say the girl’s portrait was idealised I do not mean that it was falsified. Something Gissing left out, it may be, that in another mood he might have drawn and even darkened, but he added nothing untrue. Among the other figures of his canvas are many of Thyrza’s elderly feminine neighbours. Even those he treats with kindness. Not yet was he much embittered by his contact with shrill-voiced landladies and the sluts of poverty-stricken service as to be utterly merciless. We find among them none of those of whom he said: “In the highways and by-ways of life, by the fire-side and in the bedchamber, their voices shrill upon the terrified ear. It is difficult to believe that death can stifle them; one imagines them upon the threshold of some other world, sounding confusion among unhappy spirits who hoped to have found some peace.”

I think we may say that Thyrza is entirely possible. If not, she is at least so well drawn as to carry conviction. But even here, in the slums of Lambeth, there underlies the whole theory of the book, the theme of a girl, or of many girls, “in exile.” Thyrza was but one of the many who were “born in exile ‘ and, in the end, died there. With her stands Gilbert Grail, the solitary labourer at loathly work, who loved and would have married her. For him the want of leisure and books makes his work a hell. It is said that in all portraits, whether drawn in books or on canvas, there is a great part of the artist. In Grail there was very much of Gissing, his passion for literature, his weakness, his intense resentment against circumstance. And very often it has seemed to me that when he wrote Thyrza he drew, as many painters have drawn in spiritual solitude, a picture of such a flower among gentle women as might fittingly have been his own mate. As Gissing changed so these ideals changed. Thyrza is both less and more than Sidwell in Born in Exile, but surely both at different times represented the desirable woman, a companion and a blessing in the house of one who desired help and peace. There were sadder later days when he declined in such vain ambitions and fell back upon the mere haus frau, one who would cook and do her business with some reasonable adequacy, without ‘uproar.’ He was so passionately desirous of avoiding ‘uproar’ that the word was very often in his mouth. He prayed— ‘Give us peace in our time!’

There have been those who said this book derived from Dickens and Zola. It is true that Gissing was devoted to Dickens, and that he read, and read more than once, all Zola had written. Personally I have never felt that he had any real kinship with either. So far as he drew his literary inspiration from anything but his own nature, it is to the Russians that he owed most. It is false to say that Zola, a Jew, was in any sense an exponent of the French point, or points, of view in letters. But what appealed to Gissing in the Russians was that they were real representatives of the Russian spirit, and that therefore in a literary sense their work was ‘true.’ That he has never reached the degree of popularity to which his gifts entitle him is, I verily believe, due to the fact that he himself was never able to represent, as Dickens most assuredly did, anything like the English spirit. To depict life without humour, or with the merest traces of it, is alien from the Anglo-Saxon. It is not only the fanatic and the crank who in England exposes himself to ridicule, for the ‘serious-minded man,’ so dear to many, seems to us equally absurd. Nothing but power can save it from that reproach, and it is Gissing’s quiet sense of power in living portraiture which secures him his place. But very rarely does he seem to seek for beauty. He sought it in Thyrza and secured it in a way of quiet beauty which, to my mind, is far beyond the scope of Dickens. To say that Dickens influenced Gissing seems at last to be merely asserting that both often, or mainly, dealt with the lower middle and poorer classes. If, by an almost absurd stretch of imagination, we think of Dickens re-writing Thyrza, what would he have made of it? Assuredly she would have married Egremont. And how happy all the poor people would have been made! What feasts and what unexpected legacies would have been poured upon them by Father Christmas Dickens! And if Thyrza had died? Gissing killed her with a not wholly unreasonable heart-failure, though he spared us any of the common prodromal symptoms, as he was justified in doing. I see her in this new imaginary book dying slowly and very beautifully to slow music. Dickens might have taken her from her couch and set her at the piano so that she could leave life to the last bars of one of Chopin’s Nocturnes. I can see her with her head bowed upon the keys—

Oh, sweet to have.
That died so sweetly.
Dead so sweet a grave!

It is not my purpose to analyse or to criticise the story, which is truly as interesting a one as any  Gissing wrote. In this short introduction it may be of more interest both to the ordinary reader and to men of letters if I indicate very briefly a certain influence a mere accident enabled me to have upon Egremont and on Gissing himself. In the chapter which is entitled Three Letters Egremont is supposed to write from the United States. What Gissing’s own experience was there is tolerably well known, as sufficiently clear hints of it are given here and in other books. Egremont wrote as if he had just come upon the works of Walt Whitman. I had, however, the good fortune to bring Leaves of Grass to Gissing, with many doubts as to what he, so prosodically learned, would think of Whitman’s unconventional, rhymeless, and revolutionary work. It always took some courage to force upon him anything in any way out of the great literary tradition. He took the volume with visible distaste. Yes, he had heard of the man. Was he really any good? Of course my opinion was not wholly without value, but was I not sometimes too enthusiastic about new things ? He recalled such a case. But, and here he sighed, if I insisted on  reading something aloud I might do so. His consent was grudging, his whole attitude discouraging. And yet when I had read bits of Whitman for about ten minutes without any obvious signs of weariness in the listener, and looked up for his opinion, he held out his hand for the book, and presently said that he would like me to leave it with him. The result may be seen in the beginning of Egremont’s second letter:

‘I am sending you Whitman’s “Leaves of Grass.” I see from your last letter that you have not yet got the book, and have it you must. It is idle to say that you cannot take up new things, that you doubt if he has any significance for you, and so on. You have heart and brain, therefore his significance will be profound.’ Later in the same letter he quotes from ‘A Song of Joys,’ and his comment is—‘What would I not give to know the completeness of manhood implied in all that?’

That Whitman in the end meant far more to George Gissing than he could then, or now, mean to me, is easy enough to understand. The most devoted man of letters is still a man, a wanderer and a wonderer both. Gissing in Thyrza voyaged not a little in the spirit, but he needed, and at times he knew it, the breath of the open air and freedom outside the student’s ‘pensive citadels.’ And so the big-breathed Whitman called to him. At first I was surprised, but at last understood. The forced pessimist in the end may well sigh as he envies those who, by some strange gift of the gods, find joy wherever they go. It may be that Gissing consoled himself with the thought, as he says here, that Moschus and Catullus would always be more to him than Whitman. At least he knew that Whitman was ignorant of him who chanted over dead Bion and of the magician of Sirmio.

This is, indeed, but little to say of the book itself. But I can at least affirm that it is a book out of the writer’s heart. It has as much of him at his best, when he is most kindly and pitiful, as anything he ever wrote. Even in the sketch of Lambeth, when all Lambeth goes to market, I find none of Zola’s sheer brutality, nothing of the bitterness that marked Whitecross Street in his earliest book, none of the savage contempt he shows for the masses at their pleasures that can be found in The Nether World. For all the book’s essential sadness those who read it may be glad to know that when it was being written the author was, perhaps, as near happiness as he ever reached. When it was done I know that he had his own ‘ Song of Joy.’