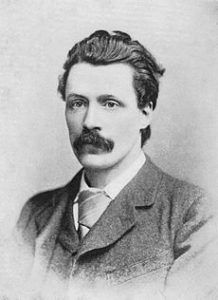 I’ve always been slightly chary of Will Warbuton, having been warned that it features a happy ending. Anyone familiar with Gissing’s novels will know that he is relentlessly bleak, and anything else would be plain wrong. Much to my relief, misery still abounds in this story, and Gissing’s characteristic obsession with money, sex, and class is evident throughout.

Will Warburton is an essentially cheery soul whose financial security is destroyed by the recklessness of an unreliable friend. Having only a few hundred pounds in the bank and a widowed mother and a sister to support, the middle-class Warburton resolves to buy a grocery business in South London. Although resigned to this twist of fate, he struggles with the “sickening weariness of routine” and the humiliation of serving behind a counter. Emasculated by his ill-fortune and class relegation, he is easy prey to a dishonest landlady, who exploits his meagre and hard-won income. Indeed, Warburton epitomises Gissing’s ubiquitous trope, that of the man whose iniquitous social position is determined by his financial situation.

Warburton’s fortunes are juxtaposed with those of Norbert Franks, an initially idealistic painter who craves the popular success that will give him enough money to marry. By pandering to commercial tastes, he finds himself the possessor of a considerable fortune and also the hand of Rosamund Elvan, the woman coveted by Warburton. Here there are clear parallels with Gissing’s masterpiece New Grub Street, in which true artist Edward Reardon starves in his garret, while Jasper Milvain successfully exploits the literary marketplace. However, Warburton’s honesty and hard work are ultimately rewarded by modest prosperity and the love of Bertha Cross, a woman who can see the gentleman trapped in the shopkeeper’s apron. Having earned enough money to employ two assistants, he makes a tentative ascent up the social ladder, and contents himself with a reliable, if monotonous, living. Initially merely performing the role of grocer, he eventually embraces it, thereby finding inner peace.

It is Warbuton’s mother-in-law, the appropriately named Mrs Cross, who really steals the show. Trapped indoors on a modest income, her only sport is to make the maid’s life a misery. While most of her domestic drudges tire of being underpaid and underfed and simply find a better position, Martha decides to rebel, demanding “Is that a dinner for a human being, or is it a dinner for a beetle?” After appeasing her gnawing hunger with cheap gin, she proceeds to smash Mrs Cross’s dinner service, finally chasing her round the kitchen table with a poker. It can only be imagined that such antics will relieve the monotony of Warburton’s quotidian existence. Perhaps mindful of following Mrs Cross’s example, Warburton’s sister Jane decides to take up paid employment in her friend’s horticulture business, even though her brother doesn’t “much care for that idea of girls going out to work when they could live quietly at home”.

Will Warbuton met with popular success and favourable reviews, a rare combination for Gissing. Alas, it was his last completed novel and published posthumously, so he was unable to enjoy the rewards of his labours. The author’s failing health is evident in the short chapters and thinness of some scenes. Had he been spared a little longer, I’m sure Gissing would have added the texture that characterises his greatest novels and further developed some of the implications of his intriguing plot. Notwithstanding these compromises, Will Warburton remains one of Gissing’s most endearing creations.

There aren’t any decent editions of Will Warbuton currently in print, but I downloaded a free Kindle version.