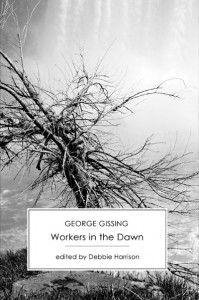 Workers in the Dawn (1880) was the first published novel from the pen of George Gissing, one of the nineteenth century’s most original writers.  It tells the story of Arthur Golding, a young boy who finds himself orphaned after his dissolute father dies in the squalor of a London slum.  Through a series of fortunate encounters, he gains a good education and embarks upon a career as an artist, meeting the woman of his dreams, Helen Norman, along the way.  As this is Gissing, however, it all goes horribly wrong when he rescues an alcoholic prostitute from the streets and tries to reform her, an episode that is largely autobiographical.

All of Gissing’s novels reflect his obsession with class, sex, and money, and Workers in the Dawn is no exception.  Here he examines the place of women in society, and also presents a realistic picture of working-class life at the time.  At this point in his career, Gissing was going through a Socialist and Positivist phase, and the debates surrounding both are interwoven throughout the narrative.  Explaining his socialist agenda, Gissing wrote:

First and foremost, I attack the criminal negligence of governments which spend their time over matters of relatively no importance, to the neglect of the terrible social evils which should have been long since strongly grappled with.  Here I am a mouthpiece of the advanced Radical party.

He came to regret his early adherence to left-wing principles, however, later leaning towards to Malthusian view that the poor were irredeemably vicious and ought not to be supported.  Indeed, he later heavily revised the text of Workers in the Dawn and eventually expunged it from his list of publications.

Although the initial critical response to the novel was mostly unfavourable, the Manchester Examiner and Times wrote: “He has written one of the most painful stories we have read for a long time, but assuredly one which emphatically offers a promise of something great.”  In 1880, the press were still wary of the literary school of realism, and inclined to castigate its exponents.  Gissing’s authorial voice is mindful of this situation, adding in chapter five: “A conversation ensued which I shall not endeavour to repeat, under fear of being stigmatised by the critical world.”

In Workers in the Dawn, Gissing went much further than his contemporaries in exposing poverty and attacking the causes of it, aligning himself more closely with Zola and Flaubert than Dickens and Trollope.  The narrator is an urban flaneur, who guides the reader through the squalid streets of some of the poorest areas of late-Victorian London.  There is a sense of Mayhew when we are introduced to the baked-potato seller and the umbrella-mender.  Geography is fundamental to the novel, and this edition includes a detailed map prepared by Richard Dennis, Professor of Human Geography at UCL.

Professor Dennis’ work shows that the East End of Arthur Golding’s London was much close to the city than the districts associated with fin-de-siècle ‘Darkest London’.  Adam and Eve Court, the centre of the novel’s degradation, is close to the Barbican and was actually cleared by the Metropolitan Board of Works just a few years after Workers in the Dawn was published.  Now, of course, the area is associated with wealth and prosperity.  As Debbie Harrison writes in her introduction:

The novel reflects the anxieties of a metropolis troubled by the growing contagion of pauperism in the east, threatened by an increasingly radical working class, and weakened by an effete generation of middle-class apostates, cynics, hypocrites, and rakes.

Workers in the Dawn is rich with allusions to art and the Classics, and also the philosophical debates of the day.  As a debut novel, it is inevitably stuffed with every idea Gissing ever had, but is nevertheless an intriguing evocation of the preoccupations of a mid-Victorian intellectual.  The wealth of detail is covered both in the scholarly introduction and extensive endnotes, so there is plenty here for the seasoned Gissing scholar and the general reader.  Perhaps in an attempt to achieve wide appeal, Gissing also includes a sensational subplot involving adultery, divorce and (excitingly) firearms.  Although John Sutherland laments the “melodramatic excesses” of the novel, Pierre Coustillas in his preface quite rightly says that it “cannot leave a thinking man or woman indifferent.”